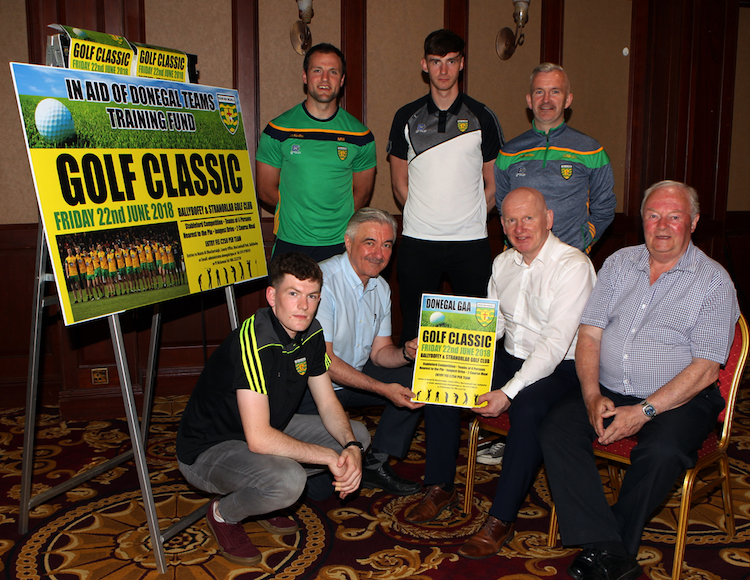 Donegal GAA officials have received financial commitments from a number of Donegal exiles in London as the top brass look to strengthen the purse for the county’s teams.

Donegal County Board Chairman Mick McGrath and County Treasurer Cieran Kelly visited London last week, where they attended a golf classic hosted by the Donegal Golf Society in the English capital. They were joined by former Ryder Cup captain Paul McGinley, whose father Mick is a native of Dunfanaghy.

Group pictured at the launch of the Donegal GAA Golf Classic, which will be held on June 22nd at Ballybofey & Stranorlar Golf Club. Picture by Brian McDaid.

A number of fundraisers have been organised, including a Golf Classic, which will be held on June 22nd and a fundraising night in Leopardstown next Thursday.

“We’re getting a positive response,” McGrath said of the county’s fundraising ventures.

“We have just returned from a sounding of Donegal people in London. We are very confident that it will be positive going forward. We have set up a committee in London, of Donegal business people, who are based there.

“We have identified 40 companies and there is quite a lot of activity taking place.”

McGrath was based in London for some time previously and made a presentation to a group of people last week at the golf classic. A video prepared by Brendan O’Donnell and voiced over by Donegal actor Sean McGinley was played.

“We got a huge commitment,” McGrath said.

“In 20 minutes, we had five people committing substantial money. There are strings attached, but not strings that can’d be handled. It is about setting up a network and selling to them what we’re about. It’s not all about building in Convoy, but about developing our teams in the community.

“A lot of Donegal people have left Donegal and a lot of them have become very successful. I was an emigrant myself. If they are not involved in football, they can sort of disappear and you might only see them once or twice a year. People in London were very appreciative of us coming over.”

A night at Leopardstown next Thursday is expected to be a full house and county officials are hoping that a Golf Classic on Ulster final weekend will prove a huge hit.

The Golf Classic is being organised by former Donegal manager and Chairman PJ McGowan and will take place on Friday, June 22nd. McGowan has with him a hard-working committee of Gerry Rushe, Barney Gallagher, Eddie Walsh, Fergus McGee, Noreen Doherty, Frankie Doherty and Philip McGlynn.

“We hope it will be a major success on the Friday of the Ulster final,” McGowan said.

“There were two incredibly impressive performances in Derry on Sunday. The teams, the seniors and the under-20s, face a long campaign in the summer and there are a lot of funds required. The Board are also trying to keep the Training Centre in Convoy moving forward.

“It would be the icing on the cake if the two teams were in Ulster finals that weekend.”

The Golf Classic will be held on 22nd June in Ballybofey & Stranorlar Golf Club. It will be a stableford competition with teams of four costing €250 to entry. Players will get a two-course meal.

Entries can be made to Noreen Doherty, County Office, Mac Cumhaill Park, Ballybofey; via email to administrator.donegal@gaa.ie or by contacting PJ McGowan on 086-2222750.