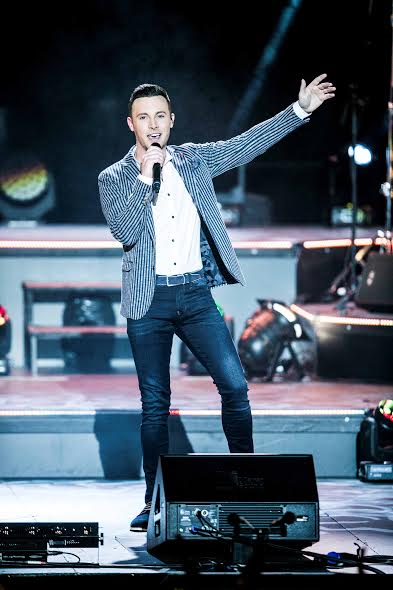 Liverpool-born Carter has taken the Irish country music scene by storm since his debut album Starting Out in 2007 and the Championship Village is set to be rocking like a ‘Wagon Wheel’ when he headlines the Glashedy Sessions on the evening of Friday July 6.

Over the four nights of the tournament, a host of musical acts will light up the spectacular Donegal links including home-grown indie rock quartet The Plea from Ballyliffin who will tee things off on Thursday night, followed on the Friday evening by Carter who said he was excited by the prospect of playing at such a huge event.

“I’m so excited to play at such as unique venue as Ballyliffin Golf Club ahead of this year’s Dubai Duty Free Irish Open and I think it will make for a pretty special atmosphere on the Glashedy Stage,” said Carter.

“This year’s tournament is an historic one, being played in County Donegal for the first time ever – a county that is very special to me and one which has supported me throughout my career.

“It’ll be fantastic to play such a big gig in front of so many of my loyal fans – not to mention the thrill of performing to a new audience that comes with a massive event like this,” he added.

Saturday night is sure to be another party night when folk band The Logues bring their own brand of ‘psycho ceilidh’ music to the stage. The five-piece from County Tyrone have made partying music their own and are now one of Ireland’s most sought-after live bands.

The honour of closing the festival on Sunday July 8 will go to the Dubai Duty Free Irish Open house band The Groove Robbers, a popular four-piece from the North Coast, whose energetic live show featuring music from many decades will keep the party alive after the golf has finished and the champion crowned.

Other musicians lined up to perform during the week include US-based singer songwriter Ben Glover from Glenarm, Jack McNaul from Coleraine, Triona from Downpatrick and Ricky Lorimer from Portstewart, while Cool FM DJs will also keeping fans dancing with a string of current hits.

“This event just keeps on getting bigger and better,” said Simon, “and we are thrilled to announce that Nathan Carter, one of the biggest live acts in the country, will be headlining another superb line-up of top class entertainment at this year’s Dubai Duty Free Irish Open hosted by the Rory Foundation.

“Nathan is no stranger to Donegal and I’m sure his fans from all over the county and beyond will flock to Ballyliffin for a really wonderful festival of golf and entertainment for sports fans, music fans and families.

“To be able to watch the world’s best golfers perform on a glorious links course and see all of these bands over a period of five days for just €110 for a season ticket – with free entry for kids – really is unbeatable value for money,” he added.

Tickets for the Dubai Duty Free Irish Open hosted by the Rory Foundation are on sale at www.europeantour.com/tickets and begin at €20 for Pro-Am Wednesday, with tickets for Thursday and Friday costing €32 and day tickets for the weekend costing €34 each. An adult season souvenir ticket, which covers five days of world class golf from Wednesday to Sunday, costs just €110.

A portion of all ticket sales will go directly to the Rory Foundation which supports children’s charities around the world.