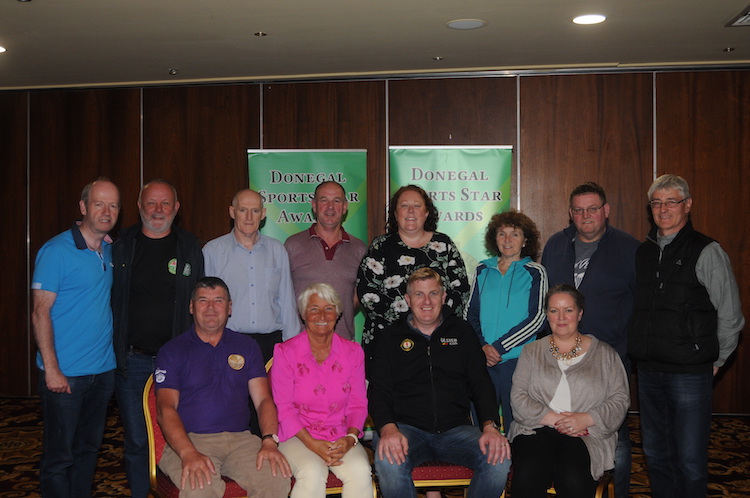 After six years as Chairperson during a very successful era for the Donegal Sports Star Awards committee, Neil Martin stepped down at Thursday evening’s AGM.

Martin stepped away primarily to his new role as the man who is now in charge of High Performance at Athletics Ireland.

Martin took over as Chairperson in 2012 and has been at the helm as the Sports Star Awards profile grew in popularity with the event attracting over 600 guests to the annual presentation function which is now in it’s 43rd year.

His successor will be Grace Boyle one of the best known figures in Donegal. A former Chairperson of the very successful North West 10k, she has also served on the Donegal GAA County Board’s executive committee.

Grace Boyle is the current Chairperson of the Donegal Hospice.

Addressing the AGM on Thursday evening in the Mount Errigal Hotel, Neil Martin said it had been a great honour to be Chairperson for the past six years but pointed out that it was all the committee members who had helped make Donegal Sports Star Awards the biggest event of it’s kind in the County.

“I have taken on a new role as Chairperson of High Performance at Athletics Ireland,” Martin said.

“That is going to take up a lot of my time. I will be in Dublin five or six times a month as well as being away to international athletic events so from that point of view I wouldn’t have the same time to give to being Chair of the Donegal Sports Star Awards.

“I also think for myself and for the organisation that a change at this time would be good. I have served in the position for six years so a new person coming in now would be beneficial going forward.”

The outgoing Chairperson said the 2017 awards function had been another huge success with a full house of 600 people in the Mount Errigal Hotel where the international snooker star Ken Doherty was a truly exceptional special guest while Manus Kelly and Donal Barrett were very popular overall winners.

Committee Secretary Paul McDaid thanked Mr Martin for the enormous contribution that he made to the Donegal Sports Star Awards organisation during his time as Chairperson adding that his work in the position would always be remembered.

Those sentiments were echoed by fellow committee member Gerry Davenport while joint treasurer Patrick McLaughlin said he was privileged to have been part of the team headed up by Neil Martin.

Neil will remain on as a committee member but he will have to devote a good deal of his time now to the post of High Performance Chairman at Athletics Ireland.

It’s a position he was elected at the Athletics Ireland Congress back in April for a two-year term.