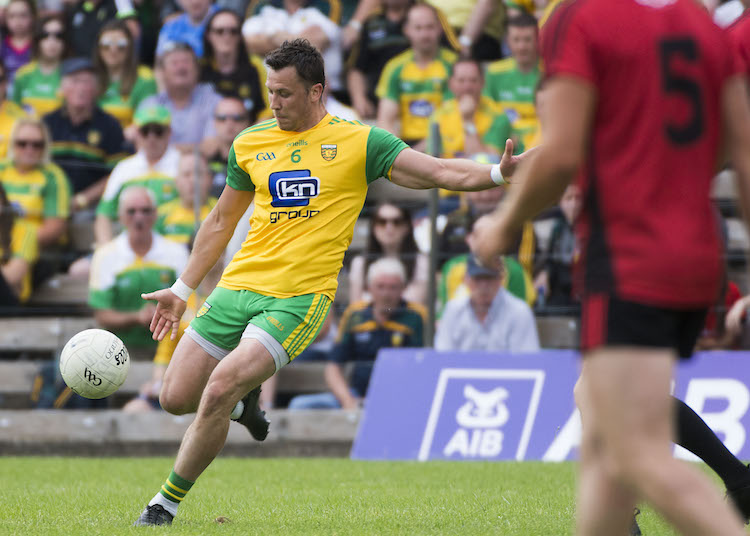 Paul Brennan now enters his second season on the Donegal panel but this has been the year that the half-back has successfully staked his claim as a regular in the team.

Brennan previously donned the Leitrim jersey but a move to Bundoran and some good performances at club level caught the eye of ex-Donegal manager Rory Gallagher.

Brennan will now compete against Gallagher on Sunday in an attempt to claim the Anglo-Celt title. The defender who works as a commercial diver admits that he feels much more part of the furniture this year and that Declan Bonner has completely transformed how the team plays.

“Rory probably had a different team set-up that he wanted to use and I didn’t fit the bill where this year Declan and his backroom team especially Karl have made a difference.

“I suppose it has changed a lot but I tell you it’s the confidence that he’s instilled in a lot of players and the belief to express themselves which is a huge thing that he has to his name (Bonner).

“I’m getting ahead of the ball any chance I can get. I still have my defensive duties but I try and get forward as much as possible to get up and support the boys up front.”

Donegal got relegated from division one of the national league this year but despite this there was still optimism regarding the style of play that was imposed.

In fact many of the pundits were giving Donegal credit for their performances considering they were unlucky on a few occasions to end up on the wrong end of single point victories.

“We were putting in performances but we weren’t getting over the line. There’s massive positivity in the camp now though.

“Maybe it was the kick up the arse that we needed to get back to winning ways.”

Sunday will be a landmark occasion for Brennan and one that could earn him his first piece of major silverware for Donegal.

“It’ll be the first provincial final I’ve played in so I’m really looking forward to it.

“We’ve been happy with certain elements of the game but it’s not the finished article, far from it. We’re looking to improve massively going into this Ulster-final to get over the line.

When asked about challengers Fermanagh, Brennan admitted that they would be a well organised side and that it would be up to Donegal to break that down.

“They set up well to beat Monaghan, I don’t think Monaghan were at the races and I think they underestimated them a lot.

“But fair play to Fermanagh they set about a system to beat them and they executed it.

Brennan was quick to dismiss whether or not he would like to see Fermanagh breaking their duck and getting their hands on the Anglo-Celt for the first time.

“I would like to see them do it just not next weekend,” he concluded.