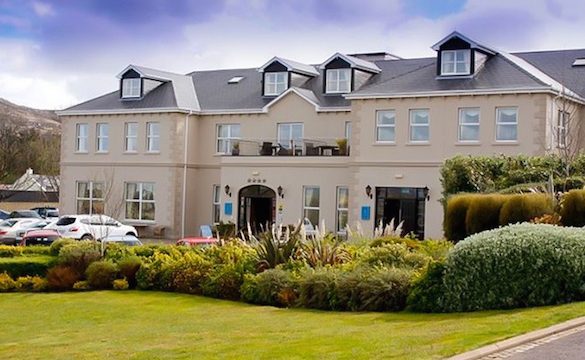 A guest accused of damaging four hotel rooms ran down into the lobby naked and blamed “gypsies” for the attack.

His legal team has blamed an over-the-counter tablet for sparking a psychosis which led to Devlin’s “bizarre behaviour.”

The 41-year-old appeared at Letterkenny Circuit Court charged with causing criminal damage to the hotel and has pleaded not guilty.

Devlin had booked into the hotel with his three-year-old son as he was going through a divorce with his wife in September 2016 and wanted to spend time with his child.

The father and son had enjoyed a day out playing pitch and putt at Ballyliffin Gold Club before having a swim and some bar food at the hotel.

An expert witness introduced by the defense, Mr Michael Lyons, told the court that the tablets taken by Devlin, of 121 Drumintee Road, Kileavy, Newry, Co Down, contained an ingredient known as DXM.

He claimed that on occasion large quantities of DXM had shown to lead to psychosis.

However, state prosecutor Ms Patricia McLaughlin said the quantity of tablets containing DXM was nowhere near that given in the examples outlined by Mr Lyons.

She added “If he had never consumed this second bottle of wine this would never have happened. It has nothing to do with an over the counter medication that most of the population have taken.”

Barrister for Devlin, Mr Colm Smyth, SC said this was a very sad case but asked what evidence there was that it was intoxication that caused him to thrash the hotel room.

He said that his client displayed “a manic strength” to wreck the bathroom which could only be caused by the intake of a substance and not just drink.

“The night porter did not say he was staggering or smelling of alcohol. He said he needed to get the gypsies out of his room. This is all bizarre behaviour but at no stage did he show symptoms that he wasn’t in control of himself because of the intake of alcohol.

“The DXN in his system caused him to display this bizarre behaviour. There is no evidence that alcohol is the sole root of his problems. It was caused by involuntary intoxication.”

Judge John Aylmer adjourned the case until tomorrow (Wed) when he will charge the jury.