A man found guilty of a vicious knife attack in Letterkenny has now pleaded guilty to possession of cocaine for sale and supply.

Kenneth Broe was due to be sentenced at Letterkenny Circuit Court today for the attack in which a man was stabbed seventeen times.

However, his barrister told Judge John Aylmer that his client had not undergone a probation report since being found guilty in May.

The Dubliner was found guilty of “intentionally and recklessly” stabbing Kristian Shortt during the row on the town’s main street ten years ago.

Broe was also found guilty of assault causing harm in the incident which resulted in the injured party spending two weeks in intensive care in hospital and receiving two “life-saving operations” after he suffered wounds to the neck, chest, head and back areas.

The jury took an hour and six minutes to unanimously find the accused of 15 Alderwood Green, Springfield, Tallaght, guilty on the lesser charge of section 3 assault after a six-day trial at Letterkenny Circuit Court. 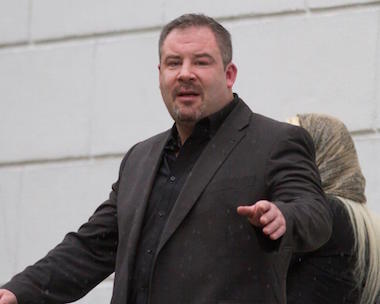 For the more serious charge, Judge John Aylmer advised the jury they could record a majority verdict following the suitable legal time lapse and after a further forty-six minutes, Broe was found guilty on the charge of intentionally and recklessly carrying out the attack.

The injured party, Kristian Shortt, had told the court in his evidence that after drinking in a number of venues in the town, he and the accused had gone to the flat of Damian O’Connor above Victor Fisher’s shop at Upper Main Street in the early hours of October 9th, 2008.

Witness and the accused had got into an argument and had threatened one another.

He, Mr Shortt, recalled a knife having been produced before he was stabbed repeatedly. The accused had used all his power and force during the attack, he claimed.

A medical report indicated that the injured party had been stabbed a total of seventeen times – three or four times in the neck, three in the back of the head, three in the chest and also wounded in the hands and back area.

He had been taken to Letterkenny General Hospital before being transferred to St Vincent’s Hospital in Dublin where he had spent two weeks in intensive care. He had undergone two life-saving operations.

Broe was today further charged with having cocaine for sale or supply when detected at Monaghan Garda Station on october 10th, 2008.

He pleaded guilty to that charge today.

Broe was remanded in custody to be sentenced on both charges at the enxt sitting of Letterkenny Circuit Court in December.