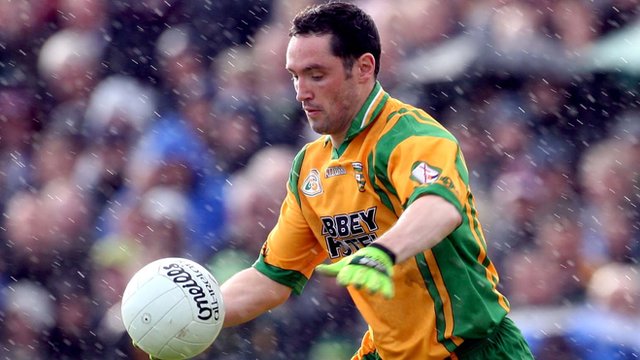 Brendan Devenney to replace Patrick McBrearty in ‘Up for the Match’

Huge interest is being shown in Sunday’s ‘Up for the Match’ which takes place in Jackson’s Hotel, Ballybofey, prior to Donegal’s eagerly awaited Super 8s clash with Tyrone (throw-in 3.30 pm).

Patrick McBrearty, who was to be part of the panel for the event, had surgery last Friday for a cruciate knee ligament injury sustained in the Ulster final win over Fermanagh in June. It was learned on Thursday evening that he has been advised on medical grounds to give the event a miss. His place will be taken by former Donegal sharp shooter, Brendan Devenney.

Appealing for Donegal supporters to come along to the ‘Up for the Match’ which gets underway at 12 noon Donegal county chairman, Mick McGrath said: “A superb panel of former GAA greats has been assembled for the event. It’s unfortunate Paddy won’t be part of the gig and I wish him a speedy and full recovery following his operation. Hopefully it won’t be too long before Paddy is back in the green and gold of Donegal, and doing the business in front of the posts.”

Donegal manager, Declan Bonner, has appealed to the Donegal supporters to lend their support to ‘Up for the Match” which is being organsied by the recently formed Donegal GAA Training Fund Committee.

“There’s a lot of money to be raised and this is the first of a number of fundraisers for the Donegal GAA Training Fund. It’s an important time for Donegal football and it’s important that these events being organised by the newly established committee are supported,” he said.

The Donegal boss also urged his team’s supporters to get behind his players when  the ball is thrown in at 3.30 pm in MacCumhaill Park.

“The Donegal supporters have been brilliant all year and they have been that extra man for us at times. There will be times during the match on Sunday when we will come under the cosh and it’s important that the supporters dig in with the players at those times,” he added.

The Sam Maguire Cup, the Liam McCarthy Cup and Anglo Celt Cup will be on display for the duration of ‘Up for the Match’ which will conclude at 2 pm. Doors will open at 11.30 am.  Admission is 10 euro, payable at the door, with under-18s free.