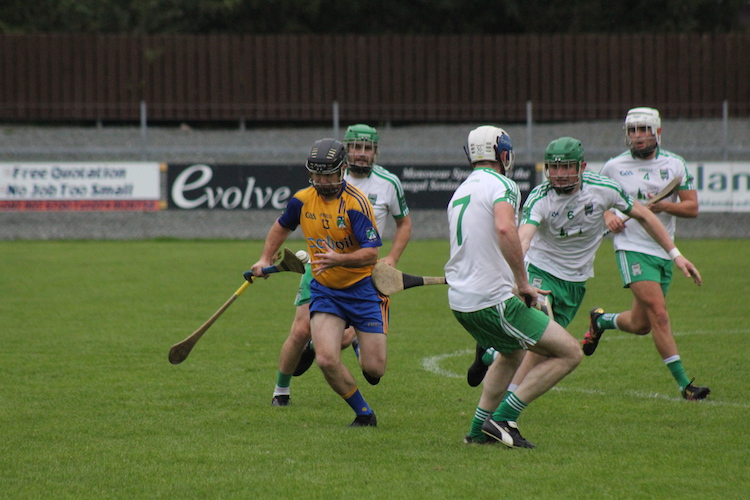 A scintillating second-half powered Burt back into the Donegal Senior Hurling final as they came from six points down to defeat Sean MacCumhaills at O’Donnell Park.

By Chris McNulty at O’Donnell Park. Photos by Chris Doherty

Burt hadn’t led since the second minute of the game when they got a rub of the green to get their noses back in front on 49 minutes. MacCumhaills goalkeeper Dillon Laverty looked to have saved Niall Campbell’s effort but the slitter squirmed from his grasp and into the net.

MacCumaills had led and been inspired by goals from Ciaran Matthewson and Dean Hannigan, but they saw a six-point half-time lead eroded away.

After Jamie De Ward’s red card in the 35th minute, for a strike on Ciaran Finn, MacCumhaills scored only three points for the remainder of what became an arduous evening at the office.

Burt scored 1-9 in succession, including a few glorious points from the evergreen Campbell, who ended with 1-5 to his name in an inspired display.

With Ciaran Dowds sent on at half-time, Burt had more purpose about them in the second half and once they got into a groove there only looked like one winner.

By the end, they had nine points to spare and were full value for it.

Burt won the last of their 38 Donegal SHC crowns in 2015 when they overcame MacCumhaills, who turned the tables on the Hibernian Park men two years ago. Both were toppled at the semi-final phase last year and were gunning for a return to the big stage.

MacCumhaills had a dream start with a goal after only seven minutes. Fintan Griffin sent Matthewson on his way and he slotted calmly past Burt goalkeeper Paul Burns. Matthewson’s goal really energised MacCumhaills, who were soon five points to the good as Lee Henderson landed a monster free and Griffin himself tucked over.

Just when Burt were beginning to warm to the task, MacCumhaills pounced for a goal that will haunt Burt for some time. Padraig Doherty got his co-ordinates in a mix as he attempted to intercept Barry Farragher’s ball in and Hannigan drove home to put the lead out to eight – and leave Burt at the base of a mountain.

Burt pegged back a couple of points through Ronan McDermott and a long-range effort by Ciaran Finn but the respite was only momentary.

Matthewson effortlessly curled over from the far sideline to help MacCumhaills lead by six at the break, 2-8 to 0-8.

Burt, though, as is their wont over the years, are never done and dusted. Burt emerged, as might have been expected, with the camáns ablaze and within two minutes of the re-start were in for a goal as Campbell fed Ronan McDermott, who made no mistake with a cool finish.

MacCumhaills were in danger of surrendering their control and when DeWard was sent off there was a sense that the pendulum was swinging in Burt’s favour.

Enda McDermott might well have given Burt the lead, but fired wide, under pressure, from the left edge of the square.

McDermott was close still when he scooped wide when the spadework seemed to have been done moments later, but with Campbell and Joe Boyle clipping over Burt inched ever closer.

Stephen Gillespie thumped Burt to within a point and player-manager Mickey McCann, mere seconds after introducing himself to the action, slammed over the equalising score after taking receipt of a short free.

Burt had a flurry of scores and were whistling by the finish to send them final-bound once more.

Burt come back from the dead to storm back into Donegal SHC final was last modified: August 11th, 2018 by Chris McNulty