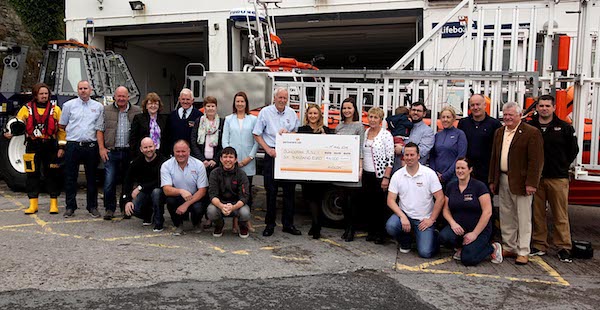 A County Tyrone family who was rescued by Bundoran RNLI earlier this summer has returned to the lifeboat station to present €5,000 to the volunteer crew, proceeds of a successful fundraising event.

The McCallion family from Drumquin, held a coffee morning at their home following the rescue in May – which saw three members of the family get caught in a rip current off the main beach in Bundoran.

The swimmers, a father and his two sons, were out for a dip around 8pm when the conditions suddenly changed.

Malin Head Coast Guard raised the alarm and a lifeboat manned by volunteer Bundoran RNLI crew was sent to rescue them. 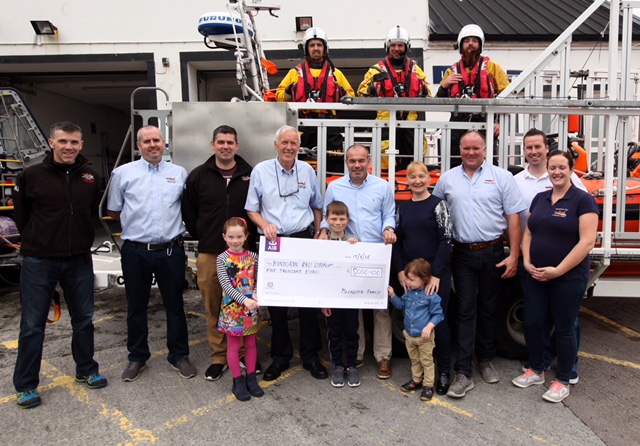 Ryan, Fianche, Cahir, Beth and Marie McCallion from Drumquin present a cheque for €5,000 to Bundoran RNLI.

They were taken to Sligo General Hospital after the ordeal.

Some 300 people visited the McCallion’s coffee morning and €5,000 was raised.

Speaking following the presentation, Tony McGowan, Bundoran RNLI Lifeboat Operations Manager said: ‘We are overwhelmed by this generous donation from the McCallion family and we want to sincerely thank them and everyone who supported their coffee morning.

“We were happy to be of assistance to the family when they got into difficulty earlier this year and we were delighted that the rescue resulted in a good outcome for everybody.’

Bundoran RNLI received another substantial donation for €6,000 from Avolon Aerospace Leasing Co. Ltd in Dublin, to commemorate the 30th anniversary of the drowning of brothers Brendan and Thomas Patton and their cousin Eddie Donagher in a fishing tragedy in Donegal Bay.

The cheque was presented to the station by Brendan’s daughter Brenda, an employee of the company.

Mr McGowan said: “This was an awful tragedy and we are grateful to Brenda and Avolon for thinking of the station in this way to mark the 30th anniversary of the drowning of Brendan, Thomas and Eddie.

“This is a huge sum of money which will now go towards equipping our lifeboat and station and enabling our volunteers to continue their work in saving lives at sea.”