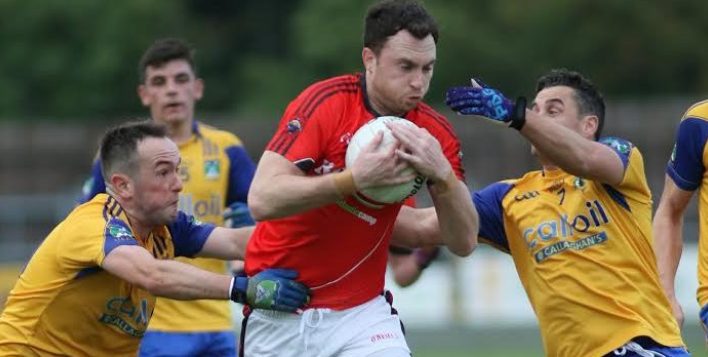 The night had darkened for Termon long before nightfall as St Michael’s cut through their neighbours at will for an impressive Championship win.

by Chris McNulty at The Burn Road

Michael Langan and Martin McElhinney (pictured) paved the way for St Michael’s and those who indicated to turn left on the N56 did so buoyed by the sight of a 16-point win.

Langan kicked six points – two of them frees that were St Michael’s only scores from dead-balls – and lorded the battle at centrefield.

His was the platform from which St Michael’s built and, with McElhinney helping himself to 1-4 on a night when the ageless and timeless Christy Toye showed flashes of the old stardust, it was a game that had the conclusion marked long before Seamus McGonagle called for the ball.

Toye arrowed past Noel O’Donnell, the Termon goalkeeper, just four minutes into the second half, with the second St Michael’s goal and the curtains could have been drawn at that stage.

Langan fielded Mark Anthony McGinley’s kick-out and off-loaded to Toye, who had goal in his mind from the moment the ball fell into Langan’s paws.

McElhinney flicked home the third in the 42nd minute and Termon’s followers watched through the gaps in their fingers for much of the second half.

The red mist descended with the darkness, too. Termon’s Sean O’Donnell saw red in the final minute for a strike on St Michael’s replacement Liam Paul Ferry.

The temperatures were still high moments later and the scuffle that ensued at the long whistle was an unfortunate inevitability.

Termon were unable to offer much in the way of resistance to a St Michael’s side that was without Colm McFadden, but who had all of the game’s ace performers.

In particular, Langan stood out during an hour when he was dominant in the air and Termon were powerless to curb those surges from the middle third.

Langan saw an early free cancelled out by Caolan McDaid, but when Daniel McLaughlin put St Michael’s in front, it was an advantage they would never relinquish.

Langan, McElhinney and Andrew Kelly made it four points in a three-minute spell for the visitors, whose first goal arrived in the 20th minute.

That came just after Daire McDaid pulled a free wide for Termon, who saw St Michael’s take receipt of their kick-outs to score 1-4 in a frustrating first half for the natives.

The McDaids kept Termon in touch, but when Langan and Toye made it a seven-point game by the break, it was hard to see any way back.

Termon had given themselves a real shot in the arm last week with a win at Sean MacCumhaills that kept them afloat in Division 2 – but they were a shadow of that side here and when Toye bulged the net it was just a matter of totting the sums at the end.

Daire McDaid – who kicked a couple of monster frees for Termon in the second half – saw a late goal chance brilliantly saved by McGinley as St Michael’s concluded a near-perfect night.

With two home games, against Four Masters and Malin, to come, St Michael’s are well placed to be group toppers.