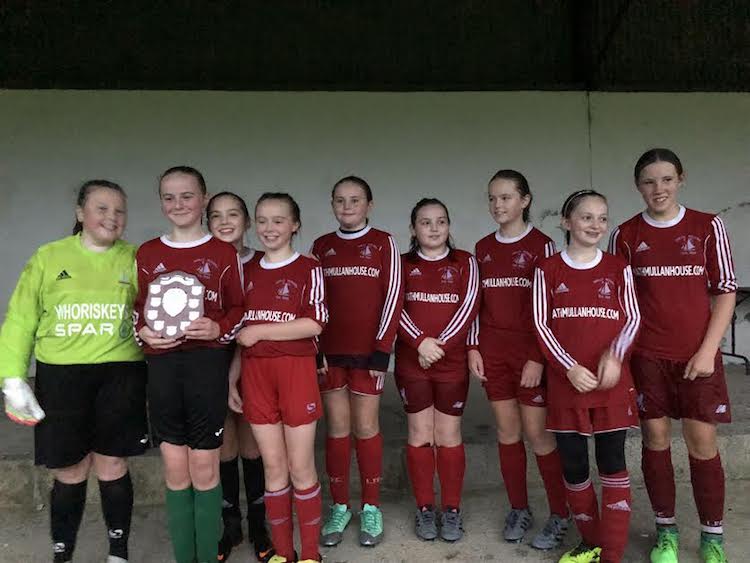 Swilly Rovers had the edge on Mulroy Academy S in the Donegal Women’s League Under-12 Charity Shield final in Ramelton this evening.

Captain Claire McCarron, Caitlain Doherty and Susie Diver got the goals for Swilly, who were pushed all the way by battling Mulroy, who might well have taken the game to penalties.

McCarron and Doherty had Swilly 2-0 up by half-time, but Mulroy hit back twice in the second half.

Swilly clung on to collect the Charity Shield following an exciting tussle.

The proceeds from the game are going towards the purchase of a defibrillator for Mulroy player Keri Sweeney.

Mulroy’s Kaylagh Sweeney was first to threaten as she weaved in before firing just wide of the Swilly goal.

Doherty had two chances, one from a well-worked free-kick, for Swilly, but was similarly off cue.

The lively Sweeney got in again, but had no joy a second time as she attempted to break the deadlock.

Swilly stole a march in the 19th minute when McCarron forced her way through and fired past Lisa Marie Gallagher.

Laragh Blaney went close to pulling a goal back before half time but, early in the second half, Blaney did pull one back.

Diver restored the two-goal cushion but, in the dying light, Aoife Carr made them sweat as she netted a second for Mulroy Academy S.