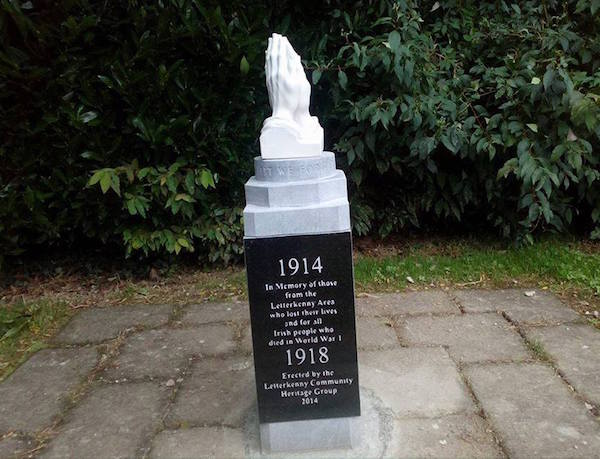 Memorial destroyed by vandals rises from the ashes

A group which had a stunning sculpture destroyed by vandals have had a new one erected thanks to a kind donation by a local businessmen.

Earlier this year the sculpture which was erected by the Letterkenny Community Heritage Group at the Cathedral Square in 2014 was mindlessly damaged beyond repair by vandals.

The sculpture was the work of local artist Redmond Herrity which L.C.H.G. commissioned for the project.

As the original sculpture had cost the group a considerable amount of money, it could not afford to have the same piece made again.

“We do many projects throughout the year and our annual funding simply could not cover replacing the memorial,” said Gabriel Flood of LCHG.

On hearing of their predicament, local stonemason Tony McCaul offered to help at little or no cost to erect a new memorial to those who lost their lives in the Great War.

L.C.H.G. say they are pleased to announce that the new memorial is now in place and would like to thank the McCaul family for their generosity.

The memorial was unveiled last weekend and is now there for all to see.