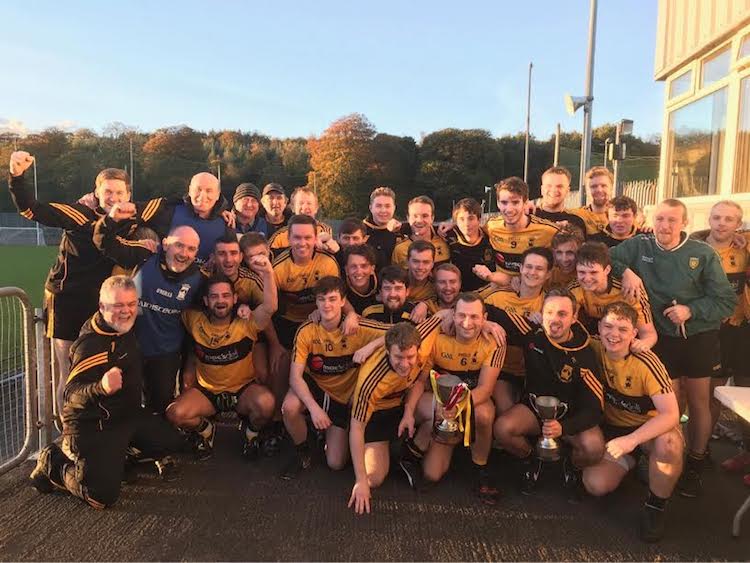 Purdy struck a goal in either half to send the black and amber to glory.

St Eunan’s surged away in the second period to bag a seven-point win and seal the title.

Glenfin had a dream start as Damien Doherty riffled past Emmet Lynch for a goal with barely two minutes on the clock.

Kyle O’Meara’s free extended the lead, but Eunan’s stormed right back into it when Purdy fired home after Michael Roche’s palm-back set him up.

Eunan’s hit the front through Pajo Rafferty and Matthew McGovern doubled the lead.

Daniel Gillespie continued a period of Eunan’s dominance with a fine point.

Glenfin needed a response and they got it as O’Meara registered.

McGovern was thwarted by Ryan Dorrian as Eunan’s sought out another three-pointer.

Aaron McGlynn’s two points helped Glenfin to come within two at the break, with St Eunan’s in front 1-6 to 1-4 at the changeover.

Glenfin stayed in touch until Eunan’s carved them open for the second goal in the 49th minute as Purdy palmed to the unguarded net after an intricate exchange of passes.

That arrived after points from Gillespie, Oisin Clarke, Michael Moreton and Rafferty.

With 10 minutes remaining, St Eunan’s led by six and Gillespie tucked over to extend the lead and it was all over bar the shouting.