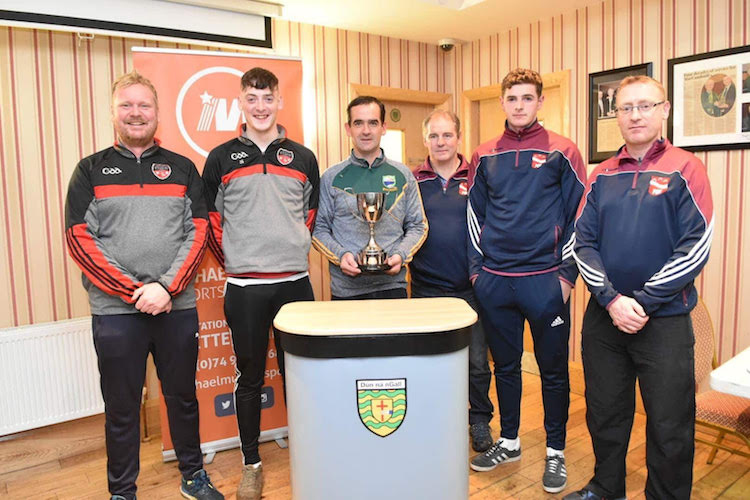 Conor Gallagher’s free, two minutes into added time, earned Red Hughs another bite at the cherry and denied Pettigo a famous win in the Junior B final.

Gallagher stepped up to convert a left-footed kick right at the death and the tie will now go to a replay next Saturday.

For Pettigo – seeking a first Championship crown in 65 years – it was a cruel end to a game in which they’d led by four points after 20 minutes.

Pettigo were left to curse some missed opportunities in the first half. That they led by just a point, 0-5 to 0-4, at half-time felt an injustice, though they went over 20 minutes without a score and were scrambling for a time in the second period themselves.

Michael O’Riordan and Kieran McGee got Pettigo off and running with early points that settled any nerves that might have lingered.

Ryan Dullaghan, from a free, got Red Hughs on the board, but Pettigo were three in front when Adie Britton tucked over and Johnny McManus fetched a high ball from Shaun Robinson and added his name to the scoresheet.

When Kevin Kane cut through and fired a point in the 20th minute, Pettigo wee daring to dream.

Last year, a hat-trick of goals by Convoy’s Ryan Carlin ended Pettigo’s hopes of capturing a first adult championship title since 1953, when they defeated St Michael’s to win the Junior A crown.

It is only two years ago now since Pettigo questioned their very existence. Club Chairman Colin McFarland remarked this week that the club was ‘at the wall’. Numbers dwindled to such an extent the club had to withdraw from the Junior Championship.

They regrouped and decided to give it another go. It worked wonders. They won Division 5 last year and reaching the Junior B decider was a significant milestone.

Substitute Ryan Bradley and Dullaghan, with another free, narrowed the gap for Red Hughs, who were within a point at the break.

Pettigo were 0-5 to 0-4 in front at the short whistle, but a Dullaghan free – his third – drew Red Hughs level for the first time in the fourth minute of the second half.

Soon, Red Hughs had the noses in front thanks to Dullaghan, this time from play.

Shaun Robinson brought Pettigo level, with their first score in 23 minutes, and they dared to dream when McManus kept his cool to score when he found a way down the right channel.

Paul Robinson and Aidan Gallen exchanged frees and it was on the knife’s edge in the tense closing moments, when Gallagher arrowed over the late leveller.