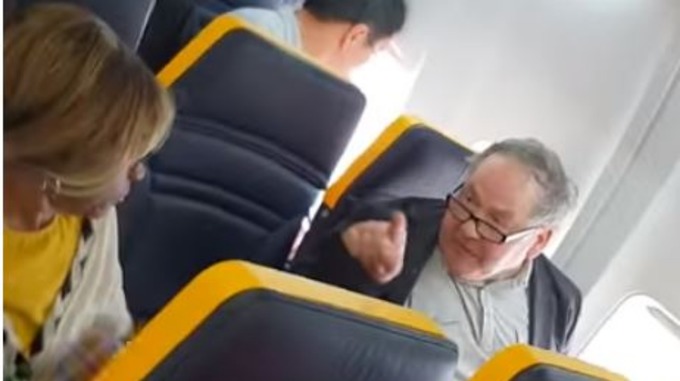 Ryanair has been criticised for not removing a passenger that was heard racially abusing a woman in her 70s.

The incident, on a flight from Barcelona to Stansted on Friday, was recorded by a fellow passenger and shared on social media.

Footage purporting to show a man shouting racial slurs at a fellow passenger was posted to social media.

The man was filmed by a fellow passenger insulting an elderly woman, and shouting “don’t talk to me in a foreign language you stupid ugly cow”.

Statement: We are aware of this video and have reported this matter to Essex Police

Ryanair said it “will not tolerate unruly behaviour like this”.

It shows the man shouting at the woman to move seats while her daughter tries to stand up to him, telling him her mother is disabled.

He also shouts at her: “Don’t talk to me in a foreign language, you stupid ugly cow.”

Cabin crew can be heard to say: “Don’t be so rude, you have to calm down” while other passengers call for the man to be thrown off the flight.

Her daughter has told The Huffington Post the row started because her mother, 77, has arthritis and it took some time for her to move out of the way for the man to get into his seat.