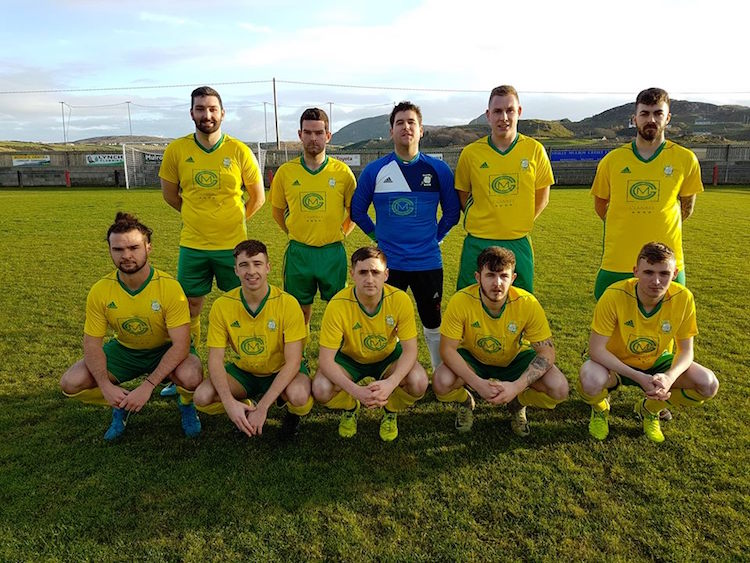 USL – Away win at Fanad gets Bonagee back to winning ways

Fanad United and Bonagee United played out an entertaining game at Traigh-a-Loch on Sunday with Bonagee coming out on top against 10-man Fanad.

Bonagee took the lead in the third minute when a good cross from the left was missed by the Fanad defence and Darren McFadden produced a fine finish high into the net.

In the 8th minute Caolan Kelly struck a fine volley form the edge of the box which John Roulstone done well to save in the Bonagee nets.

Both sides enjoyed spells of possession after that with neither creating any clear cut chances. Fanad did get an equaliser just after the half hour mark. When Gareth Breslin was adjudged to have handled the ball in the box a penalty was awarded and Paddy Carr stepped up to fire into the bottom corner.

With time running out in the first half Dean Larkin missed a good chance to put Bonagee ahead when he headed over when well placed.

Three minutes into the second half Darren McFadden sent Garbhan Grant clear on goal but he dragged his shot wide. Fanad were then dealt a double blow in the 51st minute. Conor McNulty was adjudged to have fouled Garbhan Grant in the box and a penalty was awarded, McNulty also somewhat harshly received his second yellow of the game. Garbhan Grant stepped up to take the penalty and he scored against the unlucky Mark Anthony McGinley who got a strong hand to the ball.

To their credit the ten men pushed on looking for an equaliser and came agonisingly close in the 70th minute.

Keelin McElwaine found room at the edge of the box but his shot cannoned back off the base of the post and when the rebound fell to Martin McElhinney, his shot produced an excellent save from Roulstone.

With 10 minutes remaining Bonagee got the insurance goal when Michael Doherty scored after a good break down the left. With the last kick of game Bonagee missed a chance to get a fourth when Garbhan Grant fired a penalty against the crossbar.