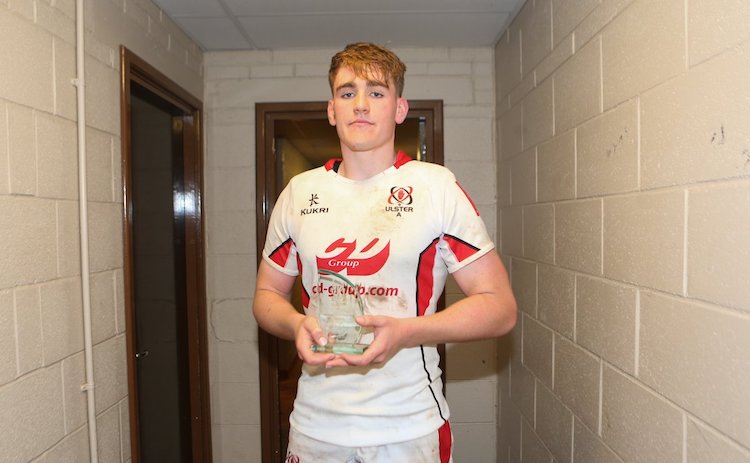 Now that he has a taste of the big stage, Joe Dunleavy wants to get another crack under the Kingspan Stadium spotlights with Ulster.

Dunleavy turns 20 next month and on Friday night the blindside flanker made his debut for the Ulster senior team in a 21-5 win over Uruguay in Belfast.

Dunleavy played 40 minutes as an experimental Ulster defeat Les Teros and it was a historic night for the Letterkenny man, who became the first ‘locally-produced’ rugby player to line out for Ulster.

Unlike Letterkenny man Allen Robinson, who played for Ulster in the 1990s having come across the Ulster Schools’ conveyor, Dunleavy’s skills were honed at Letterkenny Rugby Club.

“I was buzzing to get onto the pitch, I just could not wait for it to start,” Dunleavy said.

“I was waiting all day, I didn’t know what to do with myself. It was one of the best experiences of my life. I really enjoyed it.

“Even if I only got 40 minutes, it was a big learning experience for me, especially when you are playing against an international team that is going to the World Cup. It probably went beyond my expectations of how tough it really was. It was a big eye opener, but it was good.”

Uruguay are preparing for their fourth World Cup and are ranked 18th in the world, but a fledgling Ulster toppled them on Friday night.

Injuries to Matty Dalton and Jonah Mau’u meant a reshuffle to the Ulster team that had been named – and opened the door for Dunleavy’s big night.

The 2017 Ulster Provincial Player of the Year, Dunleavy was a try scorer for Ireland against France at the U20 World Cup earlier this year and helped his club, Malone, to win Division 2A of the All Ireland League.

Friday was the latest milestone for a player who has been earmarked for big things.

He said: “The speed of the game, and then the conditions, really made it difficult. “I think we coped well and obviously having Johnny McPhillips and Johnny Stewart on the pitch really helped, organising the team and getting boys working on the pitch.

“They had a massive pack. They probably backed themselves on their mauls and scrum. To hold them out and not let them into many mauls or give away penalties was big.

“We had 100 per cent line-out success and to maul them really well in the way we did, was a really big step for us.

“Our pack’s average age was 20 or 21, I think that is huge. It gives a lot of guys confidence. To take a team on at what they are good at, physicality wise, that is massive for us.”

Captain-for-the-night Adam McBurney got over for two tries for Ulster.

On a special night for the Dunleavy clan, Joe’s parents Michael and Josephine were among the crowd.

Dunleavy said: “It was nice to see them after the game and they had the chance to see me on the pitch.

Joe Dunleavy with family members after making his Ulster debut

“It was very special seeing my mum after the game, someone who put a lot of work in, taking me up to training every day, doing all that stuff with me. Getting to see her after the game really makes it worthwhile. It means you want to go even further and keep pushing on.

Ulster debut has given Joe Dunleavy the taste – and now he wants more was last modified: November 13th, 2018 by Chris McNulty