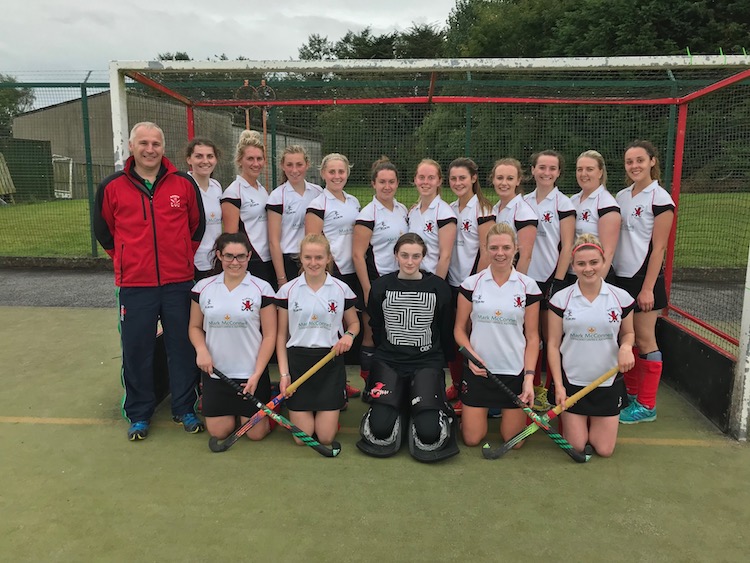 written by Stephen Maguire December 9, 2018
Facebook0Tweet0LinkedIn0Print0
Raphoe Ladies continued their fine form on Saturday as they hosted Priorians at the Royal and Prior in a hotly contested local derby.
Raphoe 3 Priorians 2
Raphoe started strong and Priorians were under pressure in the first ten minutes with Raphoe winning numerous penalty corners.
However, it took until the sixth minute, when a well-struck strike by Zara Tinney was deflected into the Priorians net after 10 minutes.Prior applied the pressure and after twenty minutes, the equalizer came. A counter attack down their left, found Priorians in acres of space, passing numerous Raphoe players before the ball found Emma Sproule. She rounded the last defender and reversed the ball past the advancing Raphoe keeper.

The remainder of the half was all Priorians, however, both teams went in 1-1 at half-time.

After an inspiring team talk from coach Richard Tinney and a few changes, Raphoe came out hard, stringing together some well-timed, one-touch hockey and passing.

Raphoe’s second goal came when Leanne Patterson picked up the ball and weaved her way past her opposition encroaching the Priorian’s ‘D’ before reversing the ball low into the bottom right corner.

Raphoe dominated again and if it wasn’t for the Priorians keeper the goals would have kept coming. She made some fine saves from both open play and penalty corners. The third and final goal from Raphoe came from some well-worked passing.

Lisa Patterson found Arlyne Kilpatrick in the centre, who found Zara Tinney advancing in their half. Zara then released the ball to Katy Love near the back post when she calmly slotted the ball into the net.

A mistake from a Raphoe midfielder saw Priorians advance into Raphoe’s final quarter where they found a Raphoe defenders foot and were awarded a penalty corner.

From this, they converted through a deflected ball bringing the score back to 3-2. This left for a nail-biting final ten minutes for Raphoe. Priorians dominated the ball, however, Raphoe defended well and the game ended 3-2.

Raphoe showed today that they are capable of working together as a team and when the pressure was on showed some excellent, well-timed passes and continued fitness levels.

A few weeks of hard training are upon the girls in the coming weeks ahead as they prepare for their Ulster Senior Cup Final on the December 29 against Omagh.
The ladies also play Omagh next Saturday in the league at 1pm in Raphoe.

Player of the Match for Raphoe this week was Vicky Wray.