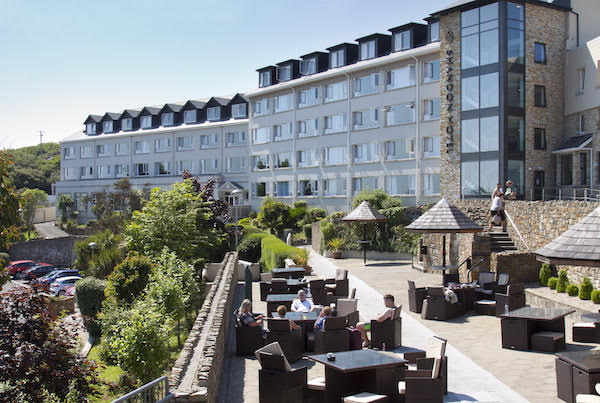 Staff at a top Donegal hotel have been extra busy keeping customers happy – thanks to their new-found TV fame.

And the team at the Shandon Hotel & Spa at Marble Hill, Dunfanaghy, are also getting to speak a lot more Irish.

It follows the huge success of the TG4 fly-on-the-wall documentary series An Shandon broadcast last month.

The general manager of the luxury hotel Carolynne Harrison says the series has drawn extra visitors to the north Donegal premises with a particular influx of Irish speakers from around the country.

“So many of our staff are from the local area and so many of them are native Irish speakers so you hear both Irish and English all the time in the hotel so that’s what began the interest from the TV production company,” said Carolynne.

“The series turned a good few of our staff into our very own celebrities so we are finding a lot of our guests coming along and asking to meet members of the Shandon team like Josie and Maureen.

“It’s all good fun, and we are finding a lot of new customers from around Ireland, north and south, who have a cúpla focal and who love being able to chat as gaeilge and they want to chat to staff who have Irish.”

Carolynne says she is hoping to introduce a system where Irish speaking staff wear the Fáinne at work, making it easier for guests who want to speak as gaeilge.

“The response to the programme has been incredible. It’s been great for all the team,” she says.

“It has certainly increased the number of bookings over the next few months and that’s great news, not just for us here at the Shandon Hotel and Spa but also for this area on the Wild Atlantic Way where jobs in tourism are helping to drive the local economy.”

Carolynne says the hotel is in discussions about a possible second series.

“The first series on TG4 was very very successful so who knows what will happen next. It (a second series) has been discussed but nothing has been agreed as yet. We’re still enjoying the first series here so we will wait and see,” she added.