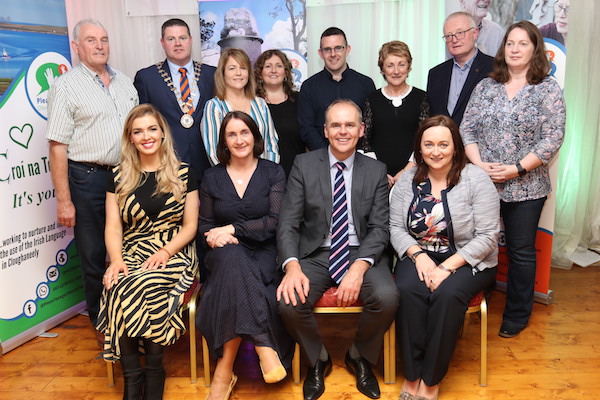 Cloughaneely is talking with its own Language Planning Community Forum

The inaugural meeting of the Cloughaneely Language Planning Community Forum’ will be held in Cloughaneely’s newest community facility, Halla Naomh Fhionáin in Falcarragh, next week.

The forum is seen as an important development in the language planning process in Cloughaneely as it brings together all the public, sporting, cultural and community, voluntary organisations and groups in the area to advise and assist in the implementation of the plan.

The primary aims of the forum are to give the public a voice in the language-planning process and to give them a say in deciding which actions should be implemented first.

It is also a way for the language planning committee to keep the public informed on the plan and on its progression.

Members of the public are also welcome to attend the forum and the language-planning committee are expecting a large number to be in attendance on the night. This occasion will be one of the first big Irish-language events to be held in Halla Naomh Fhionnáin, the new state-of-the art community facility that opened last November.

One of the recommendations in the Language Plan for Cloughaneely is that every organisation, group and committee in the area will implement their own language plan. It is hoped the forum will be a mechanism to allow this goal to be achieved.

Bearnaí ó Ghallchóir, the chairman of the Cloughaneely Langauge Planning Committee said the community forum is central to the language planning process in Cloughaneely.

“The community has an opportunity to influence the language planning process and give their opinions and advice. It offers a public an important role in the development of the Irish language in the area and allows them to participate in the process. We are hoping that every group and organisation in Cloughaneely will send a representative.”

The committee has hired the well-known facilitator, Páraic Mac Donncha to ensure the occasion is a productive and enjoyable one. The committee aim to create an energetic and productive atmosphere so as the participants can enjoy the event. The forum will begin at 730pm on Tuesday February 26th.