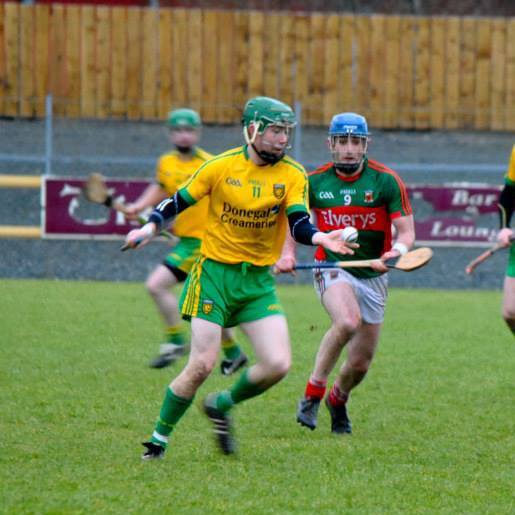 Lee Henderson believes he has to prove himself all over again – but a ten-point haul against Wicklow on Sunday wasn’t a bad way to start.

Henderson has been dogged by injury over the last 18 months, but feels back to himself again.

An ankle injury hampered his 2018 and restricted him to a five-minute cameo at the end of the Nicky Rackard final.

On Sunday, Henderson landed ten points as Donegal put in a battling performance before losing to Wicklow in Division 2B

“I’ve a few points to be proved again,” Henderson said.

“You be forgotten about when the team’s winning.

“It was hard with the boys winning away and I was wondering when I’d get back. I’m delighted to be back. It was good to get a few scores in and get the confidence going.

Donegal will face Warwickshire – the side they beat in the Rackard Cup final last summer – in the Division 2B relegation play-off.
In the absence of ace marksman Declan Coulter on Sunday, Donegal put it up to Wicklow and it was an afternoon that gave Mickey McCann’s crew some heart as they face into a Christy Ring Cup clash with the Garden later this year.

Henderson said: “We were missing a few key players and that was the difference.

“The goals for them came at the wrong time and the momentum swung.

“Declan has been unreal and been brilliant in the last two games. He was a big loss, but hopefully we’ll have him for the play-off.

“We’re not a million miles away. If we get the key men back, we just need a wee bit more collective stuff at training. We’ll keep working hard and see what happens. We’ll keep battering away.”