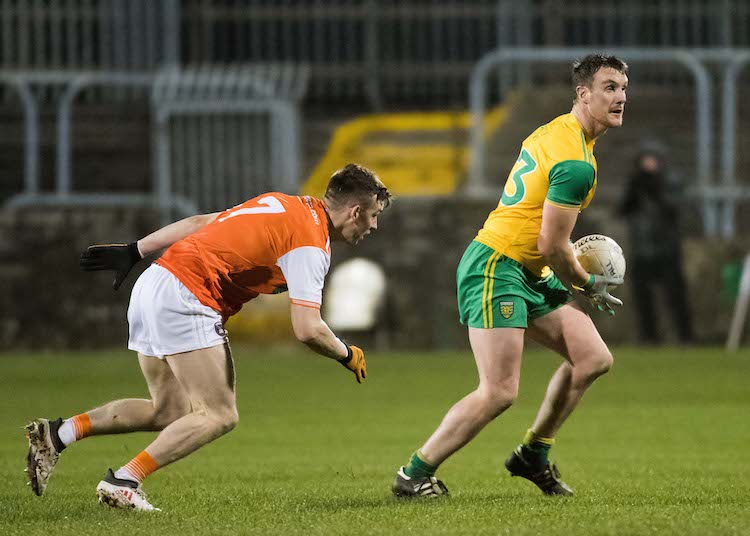 Jim McGuinness had earmarked Leo McLoone as Donegal’s number six in waiting in the early months of 2011.

However, a broken ankle, sustained while playing for Naomh Conaill against Termon  in a Comortas Peile na Gaeltachta game in Downings that March wiped out the promise in one innocuous swoop.

McLoone returned for the Ulster Championship win over Cavan three months later, kicking a huge score moments after coming on to a rapturous reception from the Donegal hoards at Breffni Park.

McLoone made his 101st Donegal appearance on Saturday night and delivered one of his best performances in years as Declan Bonner’s team edged Armagh in Ballybofey.

Coaxed back by Bonner last year, having sat out the 2017 campaign after becoming frustrated with a lack of game time, McLoone is shaping up superbly again.

His versatility has seen the Glenties man flitted around the pitch, but there is a widespread view that he’s right at home at centre-back.

“Leo very much controlled the game for us at number six. He has won minor and Under-21 titles wearing six so there is no reason he can’t step up to a senior number six shirt,” McGuinness observed following a 2011 McKenna Cup win over UUJ.

McLoone rolled the years back a little on Saturday night with a controlled display as Donegal returned to winning ways, with a 1-9 to 0-11 triumph over the Orchard.

“Over the years, I’ve been forward, back or midfield,” McLoone said.

“It was nice to be in at six and playing in there, dropping back. It was good to be in there and seeing the play ahead of me. I enjoyed it

“When you’re a young fella, all I wanted to do was to play for Donegal. When you play for Donegal and to play 100 games, it’s unbelievable. It’s a great privilege to pull on that jersey 100 times ad I’ve enjoyed it all.

“When you get a bit older and start to reflect, you really appreciate it. I’ve had a great career so far and I’m just delighted to be still there and enjoying it.”

McLoone’s fellow 2012 All-Ireland winner Michael Murphy came off the bench to score a goal late in the first half that would prove key on the night.

The Glenties man said: “The goal was a great lift before half-time. We worked very hard in the first half and it won us the game, our hard work.

“We took the foot off the gas a bit and missed a lot of scores in the second half. Defensively, Armagh didn’t look like getting a goal. They chopped over a few points, but they didn’t look like breaking through.”

McLoone joked that the horrendous conditions ‘suited us big bucks and aul bucks better!’ but there was no doubt his own display was a vintage one on his first start of 2019.

The arrival of Murphy late in the first half was an added bonus, too, and Donegal’s jigsaw is beginning to be pieced together nicely with hopes still high of a promotion tilt.

McLoone said: “Michael came on and gave a great lift. It was great to see him come back in. He was only on and he bagged a goal.

“It’s unbelievable to have him back in and he’s a great addition obviously. It makes it all positive now going to training again and it gives us something to build on.

“If we had been beaten we’d be looking at relegation down the throat, but now we’re going for promotion. We’re in a good position.”