Terence Doherty scored FOUR as champions Glengad United kept the pressure on leaders Greencastle at the top of the Jackie Crossan Premier Division.

By Chris McNulty at The Crua

Deadly Doherty hit two in each half with Connor Barrow’s double securing a routine win for Shane Byrne’s men, who move back within three points.

Doherty’s opener – scored after only eleven seconds – paved the way for a comfortable day at the office for the hosts.

Earlier in the day, goals by James Henry and Jamie McCormick gave the leaders Greencastle a 2-0 win over Aileach at Chapel Lane to open up a six-point advantage at the top of the table.

With Greencastle already having a game in hand, it was not a day for Glengad to become complacent.
And Doherty’s goal, in double-quick time, made sure they didn’t have to endure too much frustration.

Glengad broke from the kick-off and Doherty raced around Johnny Noone, the advancing Illies goalkeeper, to prod home.

It set the tone for the remainder of the afternoon.

Noone saved well from Connor Barrow, put through by Stephen Fildara’s tidy pass.
The visiting netminder flung out to his right to turn away from Doherty soon after when John Gerard McLaughlin’s ball from the back found its way to the striker on the edge of the area.

Glengad were still buoyed by last Sunday’s magnificent 3-1  win at Clonmel Town which fired them into the semi-finals of the FAI Junior Cup – and takes them to within an hour of the Aviva Stadium final.

Glengad doubled the lead in the 15th minute when Barrow tucked home from close range after good work down the right by James McKinney and Stephen McLaughlin.

Understrength Illies were without Adam Duffy, the former Finn Harps striker, while Adrian Donaghey-Doherty and William McLaughlin were also missing from their ranks.

Glengad added a third in the 37th minute as Doherty held off his marker and brilliantly steered beyond Noone; a classy goal from the in-form hitman. 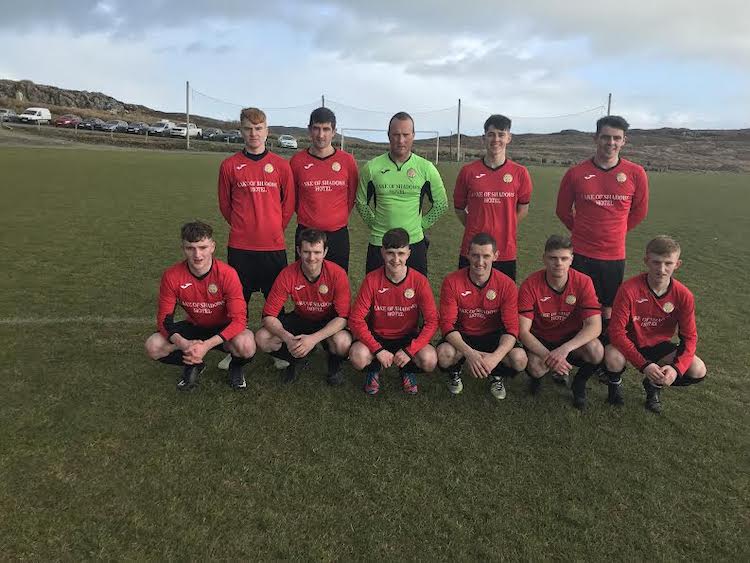 Noone had saved from Stephen McLaughlin while a delicious chipped effort by Doherty dropped just the wrong side of the target.

Eleven minutes into the second half, Stephen McLaughlin and Doherty combined with Barrow steering in from close range.

A lovely angled finish by Doherty, having been threaded in by Dillon Ruddy, completed the hat-trick and, seven minutes from the end, Doherty skipped clear to slide home his fourth.

Glengad have a busy period ahead with an FAI Junior Cup semi-final and an FAI Senior Cup first round game among the many days and dates circled in the calendars.