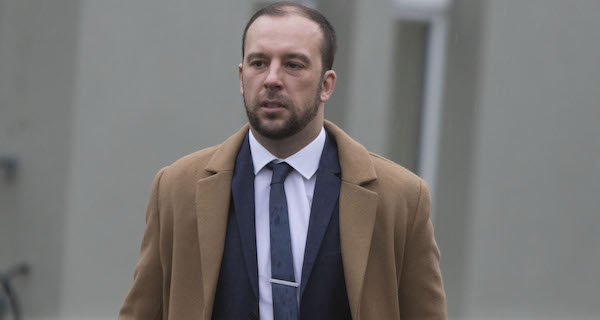 Buncrana Pier hero Davitt Walsh has been hit with a huge bill which he fears could force him to shut the doors on his popular Letterkenny cafe.

The Irish Music Rights Organisation has slapped a fee of €1,500 on the business when Davitt claims it should be just €75.63.

The huge bill arrived at Cafe Davitt in Letterkenny on the third anniversary of the tragedy in which the Kerrykeel man rescued a toddler from a sinking jeep off Buncrana Pier.

Speaking to Joe Duffy Live, Davitt said he thinks they’ve been mixed up with other local nightclubs.

He said: “I just play the local radio and a couple of things of USB – it’s not a venue, it’s a cafe/coffee shop.

“IMRO obviously got me mixed up with a couple of bars and nightclubs around me. 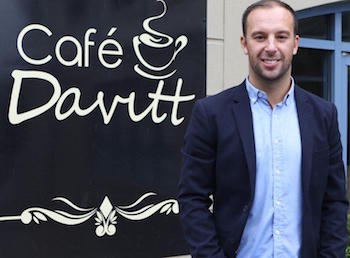 Davitt outside his new restaurant. Pic by Northwest Newspix.

“It can only sit about 40 to 45 people. I just signed a form without reading what I was signing.

“I would have serious cash problems going forward, I don’t have that money as I have people to pay and bills to pay.” The tragedy on March 20, 2016, saw a family of five drown but brave Davitt rescued four-month-old baby Riognach Anne from the sinking jeep.

Sean McGrotty, 46, his sons Evan, eight, and 12-year-old Mark, Ruth Daniels, 57, and 14-year-old Jodie Lee Daniels all drowned when their jeep slid off Buncrana Pier and into Lough Swilly.

Davitt opened the cafe in Letterkenny six months after the tragedy and said it has helped him to recover.

He said: “I didn’t think I’d ever be normal again. Opening a business and putting everything into this has been a huge help. I still have bad days but I have improved something dramatically.

“The first year-and-a-half was tough with nightmares and different things going on. My family and friends have been massive for me.

“I’m getting there, this time of year, this month is always a bad month for me because of the anniversary and it’s still so fresh.

“When you come around to March 20 – it’s just a bad time for me but you just have to keep going.”