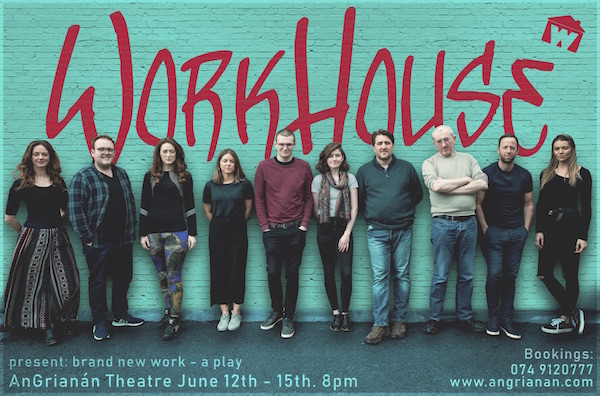 A new production at An Grianán Theatre promises to keep audiences on the edge of their seats.
The highly-anticipated Brand New Work, presented by Workhouse Theatre Company, will explore issues that will stay with you long after the final curtain, according to director Iarla McGowan.
Intriguingly, audiences are being asked to remain tight-lipped and not reveal the plot of the play. The production will remain nameless until the audience arrive on the evening of the show.
McGowan explains: “I want each audience to have the same ride as the characters in the plays. I don’t want them to know anything in advance just the way the characters in the play don’t know what’s coming next. There are issues raised that will resonate with the audience and I’d love if people were talking about them afterwards. I want each night to be an event”.
The new production opens this Wednesday June 12th with proceeds on the night going to the charity campaign High 5 for Conall.
McGowan revealed little detail about the production apart from that it is set in the present day and that it has a quality of “an Edward Hopper painting”.
He agreed that it was a “bit of a risk” keeping details of the production a mystery.
“I suppose it is a bit of a gamble but I don’t want a trailer for this. I want people to come and see something that they would never normally come and see. I love to see the avid theatre-goer coming but I’d also love to see people who think about coming to the theatre and want to but don’t. I think this is a really good introduction to contemporary theatre”.
Letterkenny-man McGowan, a professional actor who honed his craft at the National Theatre in London, praised the cast for their relentless work ethic.
He said: “The cast have been working tirelessly for three months. I wanted to get the right plays and the right structure. These plays have never been performed in Ireland. This is it. This has been in the process for four years. This production is a celebration of the great talent we have in this county. It’s a showcase of that talent and I want people to see it. This alchemy will not happen again”.
The director/actor founded Workhouse Theatre Company in 2009 and during that time spearheaded acting classes for adults and young people in partnership with An Grianán Theatre. The cast are all graduates of these Worklabs and Workshops.
Asked if it was a difficult transition from actor to director he admitted, at times, that it was.
“I would jump into a scene and then back to directing but was still doing a post-mortem so my partner was there to support me with that”.
Clearly, this has been a labour of love for McGowan who was passionate about upholding the highest standards in stagecraft throughout the production. “I did manage to delegate,” he laughed.
Go see Brand New Work and all will be revealed but remember to keep schtum!
The Brand New Work by Workhouse Theatre Company runs from Wednesday June 12th until Saturday June 15th. Wed evening performance tickets €20 – all proceeds going to ‘High 5 for Conall’ fund. Thur-Sat tickets €15
The productions is suitable for ages 16+. For further details contact www.angrianan.com Box Office: Tel: 00353 74 912 0777