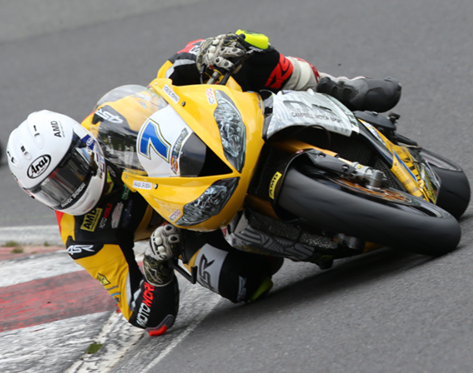 KILMACRENNAN’S RICHARD Kerr is up to fifth place in the Dickies Supersport Championship in the British Superbike Championship (BSB).

Kerr, riding the Campbell Motorsport triumph, qualified in 11th position for round 5 of the series at Brands Hatch this weekend.

A damp first race on Saturday seen Kerr running with the leading group and finished in 7th position and only four seconds off the winner, Alastair Seeley – the man who holds the record for race wins at the Northwest 200.

Richard also posted the 7th quickest lap of the race, only one second off the quickest set by Seeley.

Richard lined up on the third row of the grid for race two on Sunday and soon become involved in a great battle with several other riders for the top six as a group of four broke away at the front.

The race was eventually won by Jack Kennedy and Seeley finished in the runner up spot.

Richard was pipped for 6th on the last lap by Gearlink Kawasaki’s Ben Wilson after a fantastic battle seen them change positions throughout the closing stages.

Richard now moves up to his highest position in the championship in 5th in his second year in the class.

The Kerr team move on to Scotland in two weeks’ time and the tight and twisty Knockhill circuit.