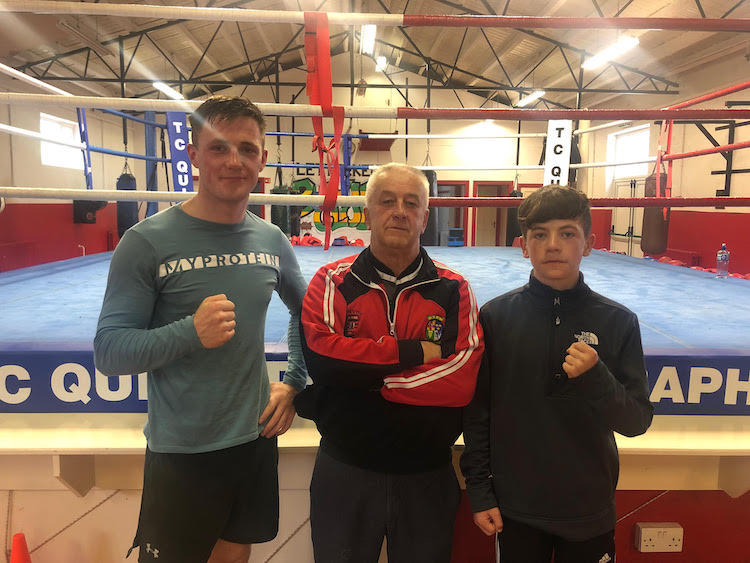 ‘Domsay’ and Donegal boxers are bound for Boston!

SINCE 1988, Dominic McCafferty has been central to the Convoy Amateur Boxing Club – and his enthusiasm is as bright as ever.

McCafferty is now in his third year as the Donegal county coach and next week takes a 14-strong Donegal selection to Boston for a major tournament.

The Donegal team includes two boxers from the Convoy club. Bryan McNamee will captain the squad and 12-year-old Pearse McBride will also make the trip.

‘It’s a great opportunity for the young fellas,” McCafferty says.

“It’s a big occasion and a big opportunity. They’ve been training hard and they’re all up for it. We have good coaches here giving their experiences. We’re ready to go.

“We’ve got a lot of good support from the Donegal County Council and from our own clubs, who are delighted that we’ve got this chance.

“Going to America will be a big experience for some of the boys and the older fellas are important because they’ve been here before.”

McCafferty sees the bigger picture – and it’s not all about the titles.

He notes the likes of Lee Boyd, now in the army, Mark McElhinney, who is in the Air Force, and Patrick Harkin, who has joined the ranks of the Irish Navy.

“Boys like that will tell you that boxing has helped them to get to where they are in other aspects of their life,” McCafferty says.

“When you have a young fella coming in, you give up a part of your own life to give them the chance that they deserve.

“We’ve got a small club in comparison to others, but there’s a lot of time and dedication that goes into it.

Dermot Rowan is credited with forming the Convoy ABC in 1986. Two years later, McCafferty arrived – and he’s been there since.

He says: “It’s all thanks to Dermot Rowan. Dermot boxed for the Twin Towns club and the club in Convoy was founded around him. As time went on, we all got involved and we kept the club going.

“It’s hard at times. There are times when you have to take your own funds or whatever, but you don’t mind when you have dedicated young fellas putting in the work. It’s good to see the lads going away and remembering the club.

“Seamus Sweeney is in Boston and boxed for us at the time. He contacted me to see if there was anything that he could do for the club. It’s nice to hear that.”

The light never fades and he talks glowingly of the likes of John McDonagh and Kerry Brown, whom he notes are ’showing good promise and hoping they’ll be in for years to come’.

‘Domsay’ and Donegal boxers are bound for Boston! was last modified: June 21st, 2019 by Chris McNulty