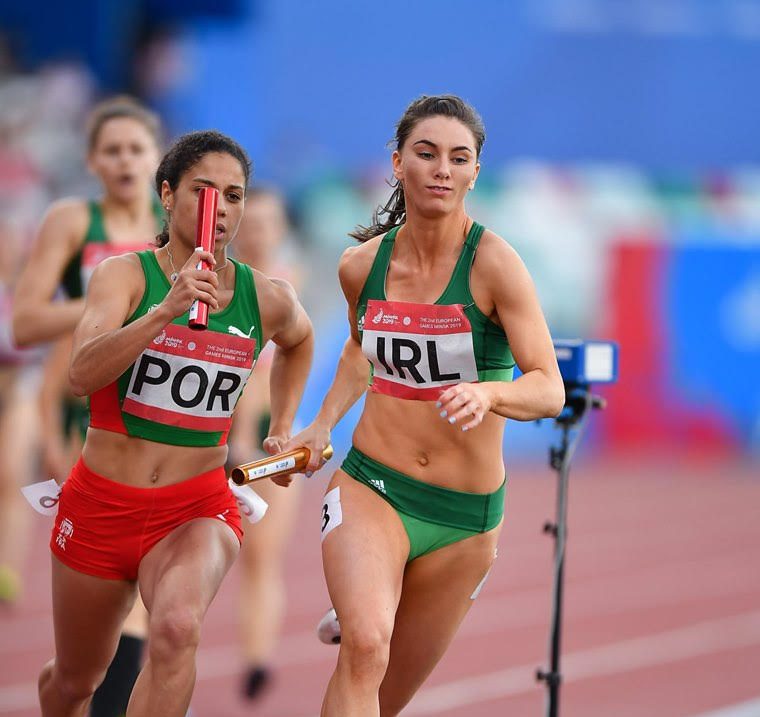 ‘BRIGHT YEAR, bright you’, the slogan goes for the 2019 European Games.

Tir Chonaill AC’s Kelly McGrory, who has had enough of the dark moments and wants some of the bright lights again, could certainly be taken by the words that beat down from every corner of the old Soviet city.

Yesterday evening in Minsk, McGrory helped Ireland to victory in the 4x400m mixed relay in the Dynamic New Athletics (DNA) quarter-final at the European Games.

McGrory ran the third leg of the race and helped Ireland to win the race in a new national record in a combined time of 3:24.14.

Ireland – whose backroom staff contains Finn Valley AC’s Dermot McGranaghan – won a tense race that was tight until the finish line, with the Danes just behind in 3:24.72. Hungary, in 3:25.04, claimed the third spot.

Laghey woman McGrory, whose star shone in the colours of Tir Chonaill AC and Abbey Vocational School, surged around the third lap in 54.4 seconds.

Ireland finished fifth in their match on Sunday, behind Czech Republic, Belarus, Lithuania and Latvia, to qualify for the quarter finals.

Ireland didn’t make it to the semi-finals, finishing fourth in the ‘hunt’ as Portugal and Hungary advanced.

Sprinter Stephen Gaffney bagged ten points for Ireland as he finished second in the men’s 100m. Gaffney finished in 10.62 seconds, behind Carlos Nascimento of Portugal, who won in 10.42 seconds.

Gerard O’Donnell, from Carrick AC in county Leitrim – a man with strong family ties in the Ardara and Donegal Town areas – finished second in the men’s 110m hurdles. O’Donnell finished in 14.29 seconds, beaten by a season’s best of 13.89 seconds by Andreas Martinsen from Denmark.

Sarah Lavin powered to second in the women’s 110m hurdles and Nelvin Appiah’s 2.05m clearance was enough for fifth in the men’s high jump.

Casey Grace, in the women’s javelin, bested a 39.17m and finished in sixth place.

There were some individual bright points in green, with McGrory surely energised by the experience.

McGrory was an Irish senior gold medallist, over the 400m hurdles, in 2016.

The dawn of a new day had arrived in 2016 with that Irish senior gold in Santry, to go along with gold in the under-23 400m.

Last year, McGrory – who has been blighted by injury at key points in recent years – hit form again with an under-23 gold in the 400m hurdles. In the same event at senior level last July, McGrory claimed bronze.

She was behind Catherine MacManus and Miriam Daly that Sunday eleven months ago and will have her calendar marked on July 27 next – when the 2019 Irish Senior Championships take place at Morton Stadium.