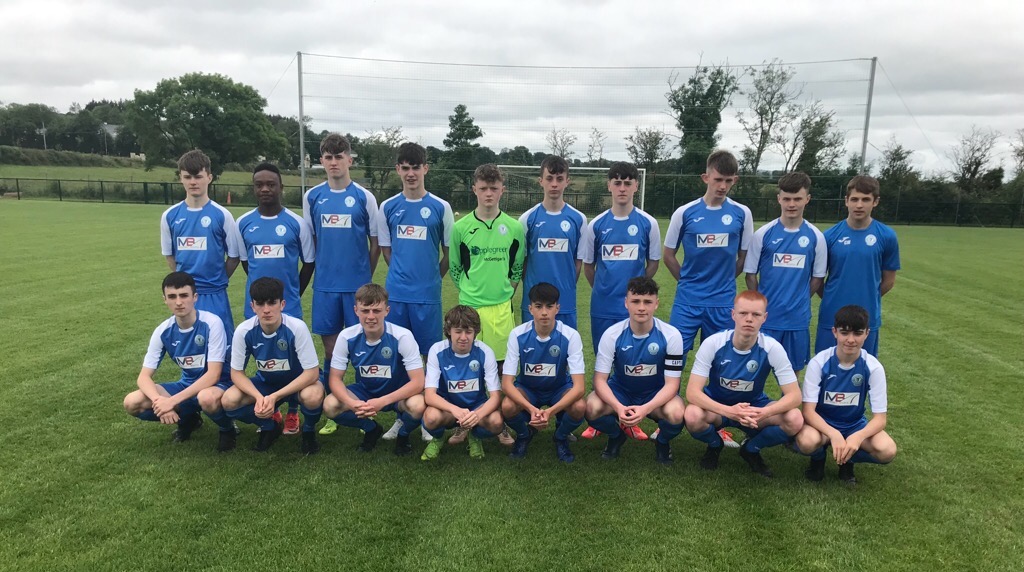 A series of missed chances by Finn Harps and a big ‘slice’’ of luck in the dying minutes earned Sligo Rovers a share of the points in this excellent Under 15 game on a super playing surface at Diamond Park in Ballyare.

By Charlie Collins at The Diamond Park

Paul ‘Rua’ McBride can rightly feel this was two points lost by his young team which played some really good football and dominated for long periods.

He was however the first to admit after the game that if you don’t take the clear-cut chances his team created you can get punished and that’s exactly what happened here.

Sligo almost went ahead in the second minute when the outstanding Eanna Clancy burst forward after breaking up an Harps attack and when a couple of exchanges of passes put him clean through it took a super save by Eoin McGettigan to deny him, the centre-back would go on to have a huge influence on the result of this game.

Harps went ahead two minutes later, an attempted clearance rebounded off Liam Donnelly into the path of Mark M’Buli and the winger made no mistake from 12 yards.

It should have been 2-0 in the 8th minute when Oisín Lynch’s super cross presented Jamie Harris with a free header from 8 yards but his effort was straight at the keeper Kayls Wajszczuk who saved well.

Sligo drew level in the 19th minute, Harps didn’t deal well with Micheal Levi’s corner and Eanna Clancy made no mistake this time as he slammed the loose ball to the net, 1-1.

Full-back Colm Rutledge did brilliantly on the right, exchanged passes with David Flanagan and went Keeper McGettigan could only get a hand to Rutledge’s curling shot, Flanagan had a simple tap-in from 8 yards out.

In the 33rd minute Harps Conor Campbell, who was impressive throughout, let fly from 20 yards, but was just wide and then in the 37th minute Luke McGlynn saw his brilliant free-kick from 25 yards strike the inside of the post and fly across the goal-line to safety.

In the final minute of the half McGlynn clipped a pass into the path of Jamie Harris inside the box but the midfielder just was able to get the proper contact and once again Wajszczuk denied him.

Harps began the second-half as they had ended the first, Mark M’Buli hit the Sligo post and Conor Campbell flashed a cracking shot just past the far post after cutting in from the left.

They finally got a deserved Equalizer in the 50th minute, Luke McGlynn’s fine play set up a cross from the left-side which struck Clancy on the arm and Referee Marty McGarrigle pointed to the penalty spot, Liam Donnelly converted to make it 2-2.

Three minutes later Harps were back in front , Donnelly did super work on the left side of the box and his clever pass was hammered low to the net by Oisín McKelvey, 3-2 to Harps. The game continued to be keenly contested as both teams emptied their subs bench and as it entered the final ten minutes it remained at 3-2.  Then Harps had three great chances to wrap it up.

Liam Donnelly found Ciaran Daldo with a super pass but keeper Wajszczuk denied him with a good save.

Then Donnelly burst through at great pace but his low shot from 14 yards was saved and a minute later as Donnelly once again outpaced the defence the keeper saved his attempted chip over him by the striker, another great chance gone, would Harps be made to pay as so often happens when good chances are not taken.

And that’s exactly what happened.. Sligo pushed forward, were awarded a free-kick which was initially half cleared but headed back towards the Harps box. Luke McGlynn, who was outstanding throughout, effort to clear only succeeded in ‘slicing’ the ball back into the box and that man Eanna Clancy who had stayed forward after the free-kick gleefully steered it past Eoin McGettigan for his second goal on the day and to earn his team a draw that was tough on a Harps team who’s performance certainly deserved better.