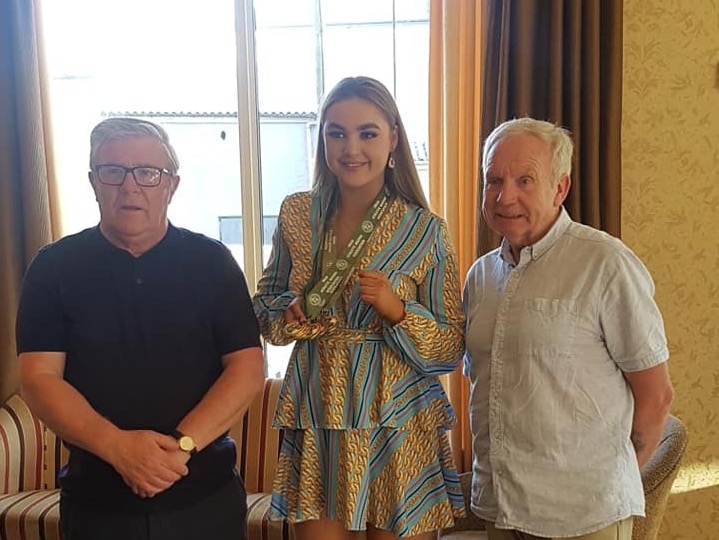 On Saturday, Gallen defeated Mary Enright in the Irish U18 welterweight final at the National Stadium.

Picture: Leah Gallen pictured with Tommy Stewart and Peter O’Donnell at a homecoming function to mark the winning of her fifth Irish title

The Raphoe ABC ace took a 3-2 split decision to claim her fifth Irish crown and her fourth in Raphoe’s colours.

“Leah has been a huge addition to the club and she’s a great girl to have,” Raphoe ABC’s O’Donnell said.

“She’s a nice girl and very modest, humble and a popular boxer in the club. We’re glad to have her.

A bronze medalist at the 2018 European Junior Championships, Gallen will travel to Bulgaria in September to compete in the 2019 European Youth Championships.

O’Donnell said: “It’s great for the club to have a boxer going to go to the Europeans two years running. It’s all good for the club.

“Leah is a great talent and she works hard. We’re lucky to have two great men like Gary McCullagh and Gerard Keaveney coaching in the club. We’d have no club without them. Their hands are full, but they still find the time.

“This makes the hard work worthwhile for them and gives them a bit of a reward to see a boxer winning a title.”

Since Danny Ryan won the Irish senior middleweight title in 1993, Raphoe ABC were without an Irish champion until Cody Lafferty bridged the gap in 2014.

Before that, Gerard McGranaghan and Columba McBrearty brought titles back. Since, Tom Doherty and Gallen have added to the list of victors.

“Danny Ryan competed at the European Youths in Izmir in Turkey and was at the Commonwealth Games in Canada, too. Tommy Stewart was a coach in Canada for those Games – they were heady days in the club, but now Leah is writing her own history.”