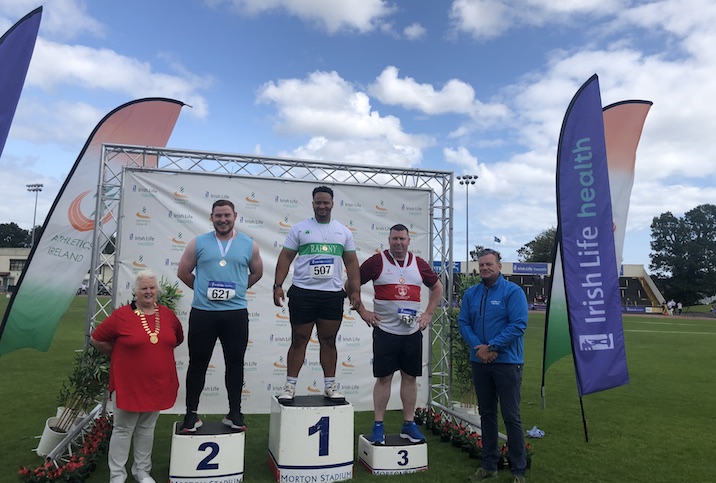 THERE WAS silver lining for Donegal athletes at this afternoon’s Irish Life Health National Senior Championships in Dublin.

By Chris McNulty at Morton Stadium

Picture: John Kelly on the podium after winning a silver medal in the men’s shot put

Boyce, who has already booked his place on the Irish squad for the 2020 Olympic Games in Tokyo, took silver in the men’s 10,000m race walk.

Boyce was behind Alex Wright of Leevale in 42 minutes and 1.26 seconds.

“My last seven months have been very positive,” said Boyce, who has set personal best markers at 20k, 30k and 50k recently.

“This has been my best season so far. 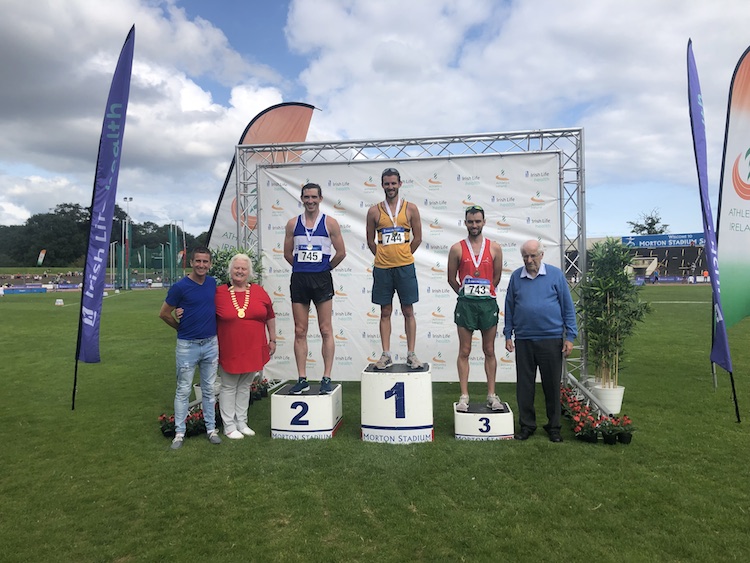 “I was happy with the race. My prep for this hasn’t been very specific and 42 minutes is only 45 seconds off my best, so that’s good.”

Kelly’s 17.60 metres was good enough for silver in the men’s shot put.

Just seven days ago, the St Johnston man set a new Ulster and Donegal record in Sweden, where he reached out to 18.01m.

Kelly the Irish shot put title in 2017 with a 16.46m throw having been the silver medalist a year earlier. Here, he took silver in the seniors for the second time.

“It’s not too bad –  that’s roughly what I’m throwing on average,” Kelly said.

“After last week’s throw, it’s a bit backward – but at times you have to go back to go forward.”

Eric Favors of Raheny Shamrocks won the event with an 18.64m throw that was a Championship best – beating the 18.61m set by John Dermody in 1999.

Kelly said: “Eric had a massive throw and he has that in the locker, but all I can do is keep working hard and try to catch him.

“I’ve upped my average by a metre so I’m happy overall. Do i want more? Yeah, I do, but i’m throwing alright this year.”

His younger brother, James, was the 2018 bronze medalist, but a series of no-throws meant he didn’t put a mark on the board this afternoon.

Gribbin record a best of 5.90m with her sixth attempt, a considerable increase on her third go of 5.78m.

“It feels great and I’m really happy to get second,” Gribbin said. 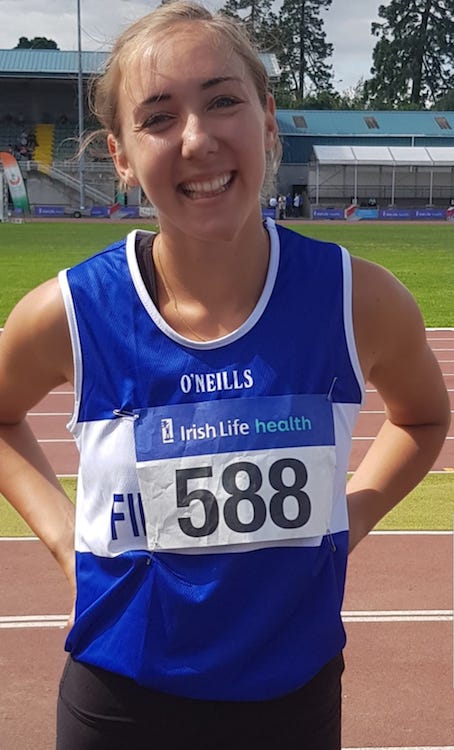 Gribbin has been hampered of late by a heel injury and elected not to partake in the triple jump – her favourite event – to concentrate on the long jump. Gribbin was down on her season’s best of 6.27m, but her 5.90 saw her take the silver, behind Ruby Millet’s 5.98m.

There was no joy for Tir Chonaill AC’s Geraldine Stewart in the women’s shot put, as she finished outside the medals.