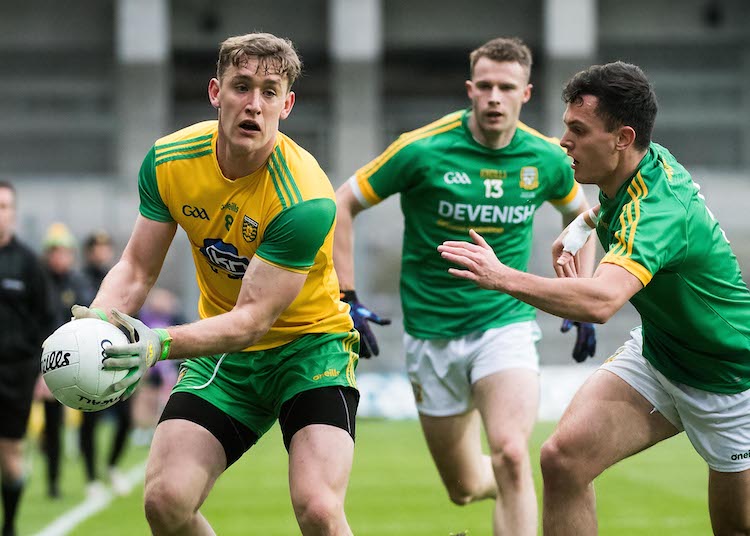 DONEGAL MANAGER DECLAN Bonner says that expects to have close to a full-strength squad for Saturday’s do-or-die trip to Mayo.

Donegal face Mayo at MacHale Park in Castlebar (6pm) with a place in the All-Ireland semi-finals up for grabs.

Eoghan Ban Gallagher’s season has been ended by a broken ankle, sustained in the days prior to Donegal’s drawn clash with Kerry on Sunday-week past.

Gallagher, an All-Star nominee in 2018, had been in flying form until disaster struck just four days before the game at Croke Park.

Kieran Gillespie has been absent since rupturing a cruciate knee ligament in the Ulster Club Championship.

The news, though, or at least the brief nuggets of insight offered by Bonner, on the rest of his walking wounded appeared to be more positive.

Neil McGee and Paddy McGrath sat out that exciting draw with Kerry, while Jason McGee and Hugh McFadden were withdrawn after picking up knocks at Croke Park.

Jason McGee was replaced by Daire Ó Baoill after only 24 minutes while McFadden made way for Frank McGlynn just three minutes into the second half.

Bonner didn’t discuss the extent of the injuries in the moments after the game last weekend and he gave little away in a pre-Mayo press briefing, either.

The Donegal manager did appear optimistic when he offered: “The players who didn’t play against Kerry are all in contention. Bar Eoghan Ban, I’d be very hopeful that we’ll have a full squad to play.

“They’re on the mend again and we’re hopeful on them.”