Donegal delight in Georgia as Irving and Ward guarantee medals

THERE was Donegal delight at the 2019 EUBC Schoolboys & Schoolgirls European Boxing Championships in Georgia today.

Carleigh Irving and Thomas Ward both won their quarter-final bouts, thereby guaranteeing at least bronze medals from the trip to Tbilisi.

Irving was the 4-1 winner on a split decision.

Irving was the deserving winner following a fine performance by the Illies light-featherweight.

Yet, while judges from Georgia, Ukraine, Kosovo and Ukraine scored the fight 30-27 in her favour, the Italian judge – Giulio de Malde – registered a score of 30-27 for the Turk.

Ballyshannon native Ward – who fights out of the Carrickmore ABC in Co. Tyrone – is a vice captain on the Irish team.

And Ward was the unanimous decision winer in his 68kgs quarter-final against Yahor Prudnikau.

All five judges – from Kosovo, Croatia, Armenia, Georgia and Ukraine – scored the fight 30-27 in favour of Ward, who will take on England’s Ethan Moor in a semi-final on Friday. 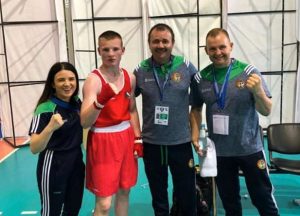