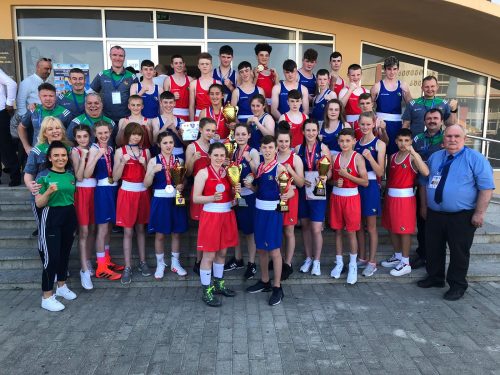 CARLEIGH IRVING and Thomas Ward will return to Ireland with bronze medals tomorrow from the 2019 European Schoolboys/girls Championships.

Irving guaranteed herself a medal when she defeated Pinar Ozkan from Turkey on a 4-1 split decision in the quarter-final.

Ballyshannon man Ward – who boxes out of the Carrickmore club in County Tyrone – was beaten by Ethan Moore in a 68kgs semi-final.

Ward, Ireland’s vice captain, had beaten Yahor Prudnikau from Belarus on a unanimous decision at the quarter-final phase.

Team Ireland finished fifth in the medals table and fourth in the rankings table at the 30-nation championships.

Irish boxing has now won 19th gold medals at this level (schoolgirl boxing was introduced in 2018) since the inaugural tournament at Rome 2003.