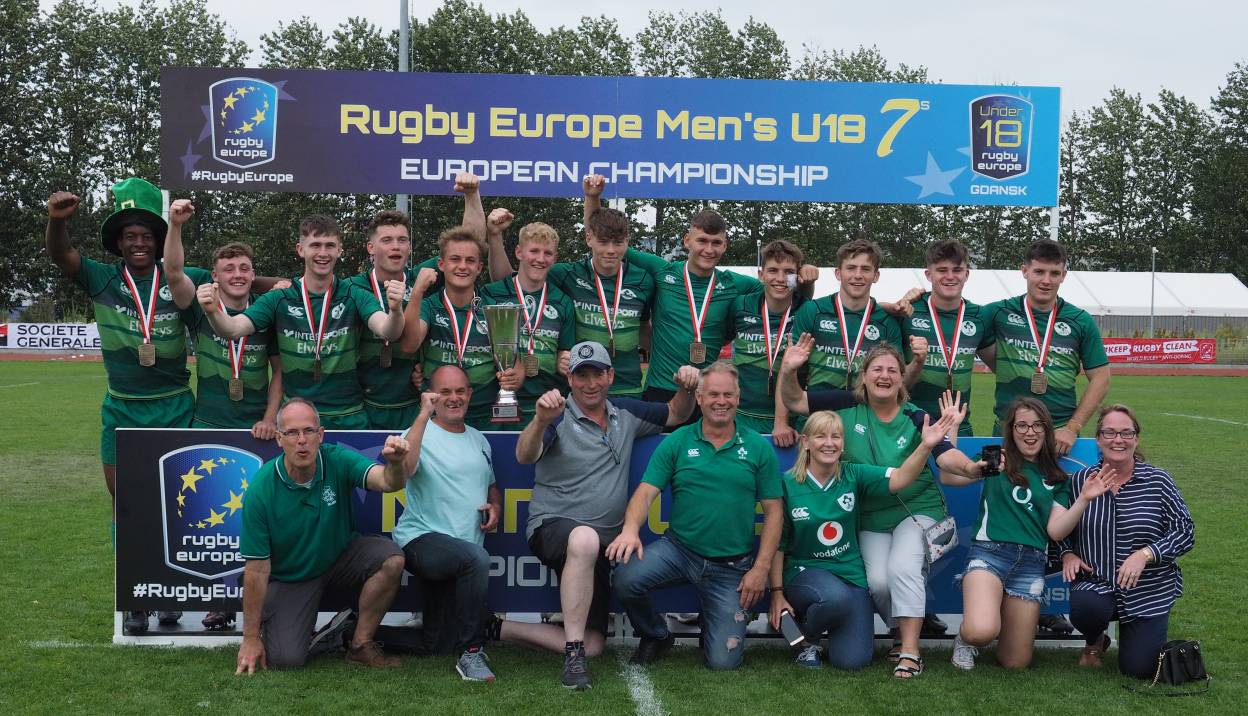 LETTERKENNY’S CHARLIE WORTH captained the Ireland Under-18 Men’s Sevens as they were crowned European champions in Gdansk today.

A brace from Kilkenny College’s Success Edogun, either side of a Conor McKee effort, secured a 26-12 final win and a third Rugby Europe Under-18 Sevens title for Ireland in four years. Their predecessors were victorious in 2016 and 2017 before last year’s team were edged out by France in Lithuania.

After losing a pool decider to Georgia yesterday, Ireland bounced back to go undefeated on day two as they ended the hopes of both Germany (15-5) and France (24-14).

The newly-crowned European champions scored 26 tries across their six matches, with Wexford Wanderers winger Josh O’Connor (pictured above) finishing as the top scorer with seven tries. RBAI’s Jude Postlethwaite had a key contribution in the forwards and as a scorer, notching five tries, while Edogun claimed four.

Spain book-ended the first half of the final with tries to lead 12-7 at the turnaround. Anton Legorburu collected the first from a well-weighted kick through by Xabier Martin, before Cooke’s slick sidestep at a midfield ruck – brilliantly won by fellow IQ Rugby recruit Langston – saw him ghost in under the posts to nudge Ireland ahead.

The tenacious Spanish side were thwarted by Edogun’s try-saving tackle, only for another kick to deliver the goods a couple of minutes later. Worth blocked it in front of the Irish posts and was unfortunate not to gather it fully, the loose ball instead being scooped up by the inrushing Arnau Andres who touched down and added the conversion himself.

The Ireland U18 Men’s 7s Team have won the Rugby Europe U18 7s Championship in Gdansk! pic.twitter.com/8ex2ldh89l

An early O’Connor break got the Irish attack firing on the resumption, with Postlethwaite also causing problems for the Spanish defence. Jack Ward Murphy looped a pass out for Edogun to cut in from the right wing and allow Cooke an easier conversion, which gave Temple-Jones’ charges a narrow lead.

Despite missing the injured Ben Moxham for the knockout rounds, Ireland dug deep to see out the result. O’Connor covered a Spanish kick back to halfway, the possession leading to Cooke’s excellent offload off the deck which McKee expertly burst onto and carried right to the near corner for a crucial five-pointer.

Ireland kept the pressure on from the restart, the onrushing Worth swarming onto the loose ball. Postlethwaite was fed to the left and his well-directed offload out of a tackle created the opening for Edogun to step inside the covering defender and confirm the win. Cooke crisply converted for good measure, leaving the final margin at 14 points.