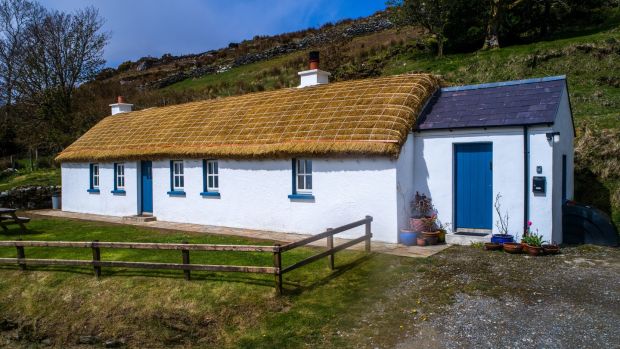 Seaside Bumblebee Cottage on the market for €275,000

A Bumblebee Cottage, high on a hill overlooking Blue Flag Fintra Beach and 4.5km from Killybegs, is for sale for €275,000 in Killybegs.

First reported in the Irish Times, a couple from southside Dublin fell in love with the view from a thatched cottage on the Wild Atlantic Way in Donegal three years ago – so, in 2016, they bought it.

Tanya McGilligan and Adriaan Waiboer completely revamped the house in sympathy with its original style, rethatching the roof and installing oil-fired central heating. They spent summers and Christmas there as well as letting it as a holiday home.

Bumblebee Cottage is a wide, single-storey whitewashed cottage built in the late 19th century: it has a high-vaulted timber ceiling with exposed roof beams, a wide open-plan living room, dining room and kitchen and two bedrooms at opposite ends of the house. A small new extension is a utility/storage room. The two-bed property extends to 44sq m (475sq ft).

Floors throughout most of the house are reclaimed oak. There’s a newly installed 19th-century sandstone fireplace in the living room, and timber units, a Belfast sink and teak worktops in the kitchen. The windows have deep sills typical of traditional Irish cottages.

The main bedroom has a vaulted ceiling and room for a king-size bed; the second bedroom has two single beds. A modern bathroom has Victorian-style sanitary ware and a bath with a power shower overhead.

Most traditional of all is the thatched roof, which the couple rethatched with grant aid from the Heritage Council: Donegal thatcher Ivor Kilpatrick applied a new 10in coat of rye straw and used willow “scollops” and ropes on the roof to protect it from high winds. The house has a septic tank and mains water supply, but no wifi.

The couple have rented the cottage at prices ranging from €550 to €780 per week since they refurbished it, employing a local woman to take care of it for them; visitors have come from all over the world, with American visitors especially attracted. It’s offered for sale as a going concern, if new owners wish to keep letting it. Bumblebee Cottage is about a 3½ hour drive from Dublin.