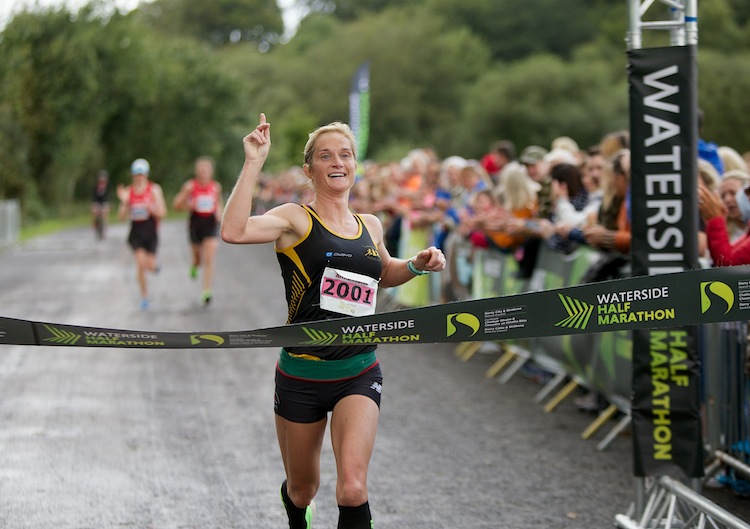 Ann Marie McGlynn and Kenyan Gideon Kimosop claimed the women’s and men’s titles in the 38th staging of the Waterside Half Marathon in Derry on Sunday.

A record breaking field of over 2,000 runners took on the challenge of the 13.1 mile course.

Letterkenny AC’s McGlynn recorded a record breaking time at the event of 76 minutes and 54 seconds.

Jim Corbett claimed the wheelchair title ahead of Karol Doherty and James Rival.

Mayor of Derry City and Strabane District Council, Councillor Michaela Boyle, started the race and was at the finish line at Ebrington Running Track to greet the runners as they finished.

“Congratulations to the thousands of runners who took part in the Waterside Half Marathon and in particular the category winners where the competition was particularly stiff this year,” she said.

“It was heartening to see the runners encouraged around the course by the hundreds of spectators who lined the route and it was clearly an emotional moment for many at the finish line.

“Well done to the Festival and Events team at Council and City of Derry Spartans for hosting another smoothly co-ordinated event and good luck to all the runners as they continue their running journey and pursuing their personal goals.”

Festival and Events Manager at Derry City and Strabane District Council, Jacqueline Whoriskey, thanked everyone who contributed to another successful event.

“A lot of work goes on behind the scenes to manage an event of this scale so I would like to thank all the volunteers who helped out as stewards and at water stations and, in particular, to Gerry Lynch and the City of Derry Spartans Club, without whose expertise this event wouldn’t be possible.

“We were delighted that more teams than ever took advantage of the relay option this year, it allows more people to enjoy the race day experience and I’m sure many relay runners will return in 2020 with some attempting the full distance.

“We are also proud that the event is one of the most environmentally friendly races ever hosted in the UK and Ireland through a number of eco-initiatives including paperless registrations and race instructions, smaller water bottles, more recycling bins and recyclable race pack bags.”