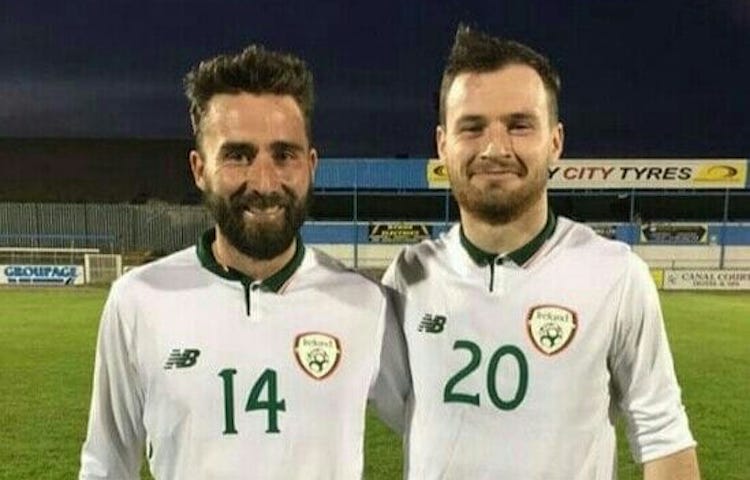 COCKHILL Celtic’s Peter Doherty will captain the Republic of Ireland amateur team in a game against Northern Ireland tonight.

Doherty is one of 11 players from Donegal in the Irish squad, made up of a Connacht-Ulster regional selection, that takes on Northern Ireland at Lecarrow.

Picture: Jimmy Bradley and Peter Doherty of Cockhill Celtic who are part of the Irish squad

The game is to mark the official opening of the John Sherlock Stand. Lecarrow is the headquarters of the Roscommon DSL.

Doherty has lined out previously in the amateur squad and last year played in the Regions Cup in Romania.

“It’s a huge match and a huge occasion,” Doherty said.

“We’re looking forward to it.”

Doherty has been an integral part of Cockhill’s dominance of the Ulster Senior League scene over the last seven seasons.

And the dependable defender said of his selection as Irish skipper: “I wasn’t expecting it at all. I’m absolutely delighted. It came out of the blue.

“Once you get a taste of it, you just want more. it’s a great thing to be a part of and it’s a great feeling pulling on the Ireland jersey.”

Glengad’s Matthew Byrne and John Gerard McLaughlin have been selected, while Daire McDaid of Kilmacrennan Celtic is the sole representative from the Donegal League.