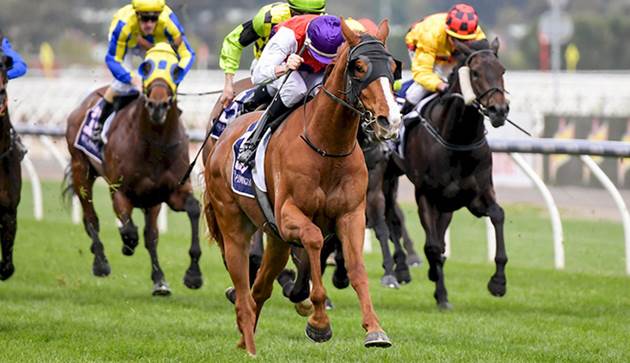 MARTIN HARLEY could have earned himself a Victoria Derby ride after claiming his first stakes win in Australia this morning.

The Trentagh man steered Warning to victory this morning in the Listed Super Impose Stakes at Flemington for Anthony Freedman.

Harley took Warning, opening up at 14/1, to a two-length victory over Independent Road and Huntly Castle.

“I’d like to say a massive thanks to Mr Freedman for putting me on and I’ve been supported by some great trainers since I’ve come here.

“It’s great to get a Saturday win like this.”

Harley recently moved to Australia after a stint in Hong Kong and his finish this morning on Warning serves as a pointer to what may be ahead for the Donegal jockey.

He added: “I had a six-month stint in Hong Kong, which was fantastic experience and after that I was advised by Mr Bowman to maybe give Melbourne a shot for the rest of the season.”

A huge run by Warning! Martin Harley had to do a bit of work to get out but once he found the gap he went BANG. 💥 pic.twitter.com/8VI1sRpzBD