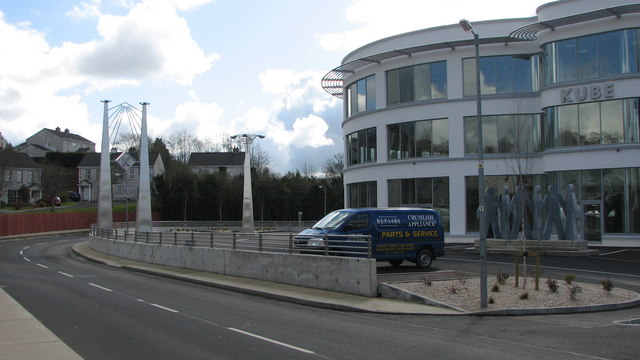 A former election candidate who attacked a security guard’s car during a stand-off at a repossessed building in Letterkenny has had a warrant issued for his arrest.

Michael Mooney failed to appear at Letterkenny District Court where he was charged with criminal damage.

The court heard how Mooney, aged 44, who is originally from Culdaff but who owns houses in Letterkenny, was at the Kube building at the Thorn in Letterkenny in January, 2017.

A security company was patrolling the premises which had been at the centre of a court battle between the banks and its original owner Brendan Gildea.

Dashcam footage of security guard Samuel Chestnut showed him arriving at the building with Mr Mooney standing on the road in front of him.

Mr Chestnut stops momentarily as Mooney refuses to move and the security guard then revs his engine.

The driver’s car then appears to strike Mooney who suddenly bangs his mobile phone off the bonnet of the car and then proceeds to kick the passenger wing-mirror  of the vehicle.

Mr Chestnut is then heard saying “That was Michael Mooney” as he drives on.

The security guard said that the damage to the car was over £250 sterling to repair as the wing mirror was smashed and there was a dent in the bonnet.

Mooney, who stood in the 2016 General Election as an Independent candidate, was later arrested and admitted he was there in support of Mr Gildea but denied any wrongdoing.

He told interviewing Gardai that he was not interfering with anybody’s business and that Mr Gildea had merely wanted to maintain ownership of the building and he was offering support to him.

He said he had been crossing the road when a car approached him on the wrong side of the entrance into a building and then struck him.

He said he had to go to hospital after developing a pain in his back and was still having physio as a result.

Judge Paul Kelly said Money had originally been in court on March 25th and he had refused to enter a plea.

“I told him he should get legal advice and he declined to agree to that and I told him I was entering a not guilty plea on his behalf,” said Judge Kelly.

He added that having heard the facts he was finding matters proved and issued a bench warrant for Mooney’s arrest for sentencing.