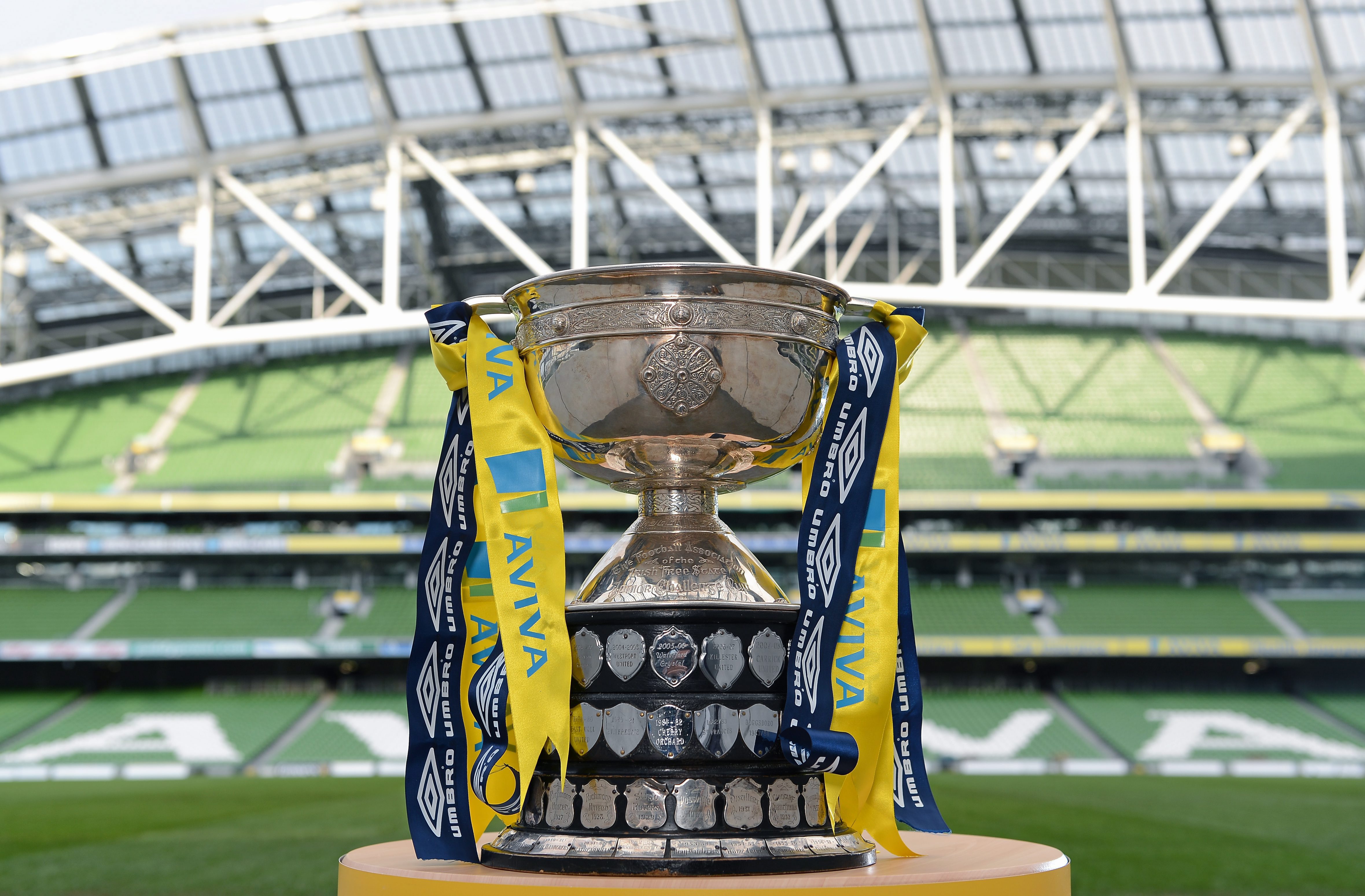 THE FAI Junior Cup took centre stage this afternoon with notable wins for Buncrana Hearts and Kildrum Tigers, among others – here’s a recap.

Carn had the first chance on 9 minutes when Will Quinn made a long pass down the right wing for Tiernan Coyne who squared  it to Brandon Browne but he fired wide from 10 yards.

Carn broke the deadlock on 18 minutes after Cade Cooke broke on the left wing and crossed for Girts Dzerins who headed it towards the top left corner of the net from 12 yards but deflected off the ‘keeper on its way in.

Carn doubled their lead on 37 minutes with a Cade Cooke free kick from 30 yards on the right found Conor Doherty who was unmarked outside the six-yard box and drove a low shot to the bottom right corner of the net.

Ballybofey nearly pulled one back on 42 minutes when Niall McCloskey made a long pass down the right wing to Conor McGlynn who rounded the defender and laid it off for Calvin O’Brien who shot low to the right and wide from 10 yards.

Carn had a chance to make it three on 55 minutes when sub Christy McDaid broke on the right wing and crossed for Ryan Kelly whose header was well saved by Chris Patton in the Ballybofey goal. Another chance came when Dylan Cooke made a long pass to Tiernan Coyne on the right wing and he rounded the defender and drove a shot to the left and wide from 11 yards.

Carn had another chance on 75 minutes when Kyle Cooke rounded a defender and squared it for Brandon Browne who shot low from 14 yards but was well tidied up by Patton.

Ballybofey nearly got a consolation on 85 minutes  after John Lynch passed to Shaun Friel on the left wing and he laid it off to Mark Griffin whose effort was pushed away to the post by Daniel Houghton in the Carn goal.

n an entertaining clash on Saturday night Culdaff had the first chance after Aiden Cunningham fed Conor Keddy on the edge of the area and his dipping shot dropped just over the bar.

Cockhill took the lead on five minutes after Mark McDaid sidestepped a defender and drilled a low shot past Callum Doherty.

Culdaff replied well and Jack McLaughlin had an effort tipped over by Eoin Jordan before McLaughlin’s driven cross was stabbed wide by Michael Coyle from six yards.

Darren Mullarkey then played Mclaughlin through on the left but Jordan turned his effort away. They got back on terms on 28 minutes when an in-swinging corner from Mullarkey was inadvertently headed to the net by a defender.

From a Culdaff corner the visitors broke ad regained the lead when Shane Doherty fed McDaid to advance into the area and slip the ball past Doherty.

Minutes later an Eoin Deery cross from the right was headed home by Michael Owen Doherty. Culdaff then had two chances before the break but Sean O’Neill headed wide before Bryan McCandless controlled well and turned but fired just past the far post.

Culdaff had the first chance of the second half but Eugene McLaughlin headed wide from point blank range on 51 minutes.

There was little in the game then until the 80th minute when Cockhill broke quickly and Doherty pulled the ball back for David Laird to clinically slot to the far corner.

Doherty in the home goal then saved well from McDaid and when the rebound fell to Laird his header came off the bar and into the keepers arms.

Culdaff got a consolation on 85 minutes when Keddy fired a stunning free kick to the top corner from 25 yards.

CLICK HERE TO READ A REPORT ON THIS GAME

Greencastle started well with Gerry Gill firing a free kick wide before Nigel McMonagle had one effort blocked before seeing another flash wide.

Cappry replied on 15 minutes when Sean McBride was just off target from the edge of the area. The home side opened the scoring on 17 minutes when McMonagle nipped in between defender and keeper onto Dylan Doherty’s long clearance to fire over the keeper to the net.

Jamie McCormick fired wide when well placed before McMonagle doubled their lead from the penalty spot after Ronan Doherty was upended.

McMonagle and Conor Gillen were then off target before at the other end Jamie Murray broke into the area and fired wide from twelve yards.

Cappry forced a corner in the early stages and Jamie Doherty headed just over before Kyle O’Meara had a long distance effort saved by Doherty.

Greencastle replied with McCormick firing over the bar before they made it three nil after a brilliant team move ended with  Jamie McCormick  drilling low to the net.

McMonagle back-heeled the ball to Stephen Grant but his effort was well saved. Grant had an effort deflected over before Ronan Doherty had one shot saved and fired wide from another.

Cappry tried to respond with with McBride firing a free just wide before Dean O’Donnell and Jamie Doherty had efforts saved.

Greencastle made it four-nil when substitute Ritchie McElhinney lifted the ball over the top for fellow substitute Christy Hegarty who rounded the keeper and slotted home.

This match between Kildrum Tigers and Kilmacrennan Celtic started off at a blistering pace. On 10 minutes Daire Mc Daid of Kilmacrennan missed a great chance when his effort went wide.

There were no further notable chances after this until the 14th minute when Kildrum Tigers got a free-kick out on the left-wing. Oran Higgins whipped it into the box and Damien Crossan headed it home to make it 1-0 to Kildrum.

On 22 minutes Christy Connaghan had a great chance to level it for Kilmacrennan but he blasted over the bar.

Oran Higgins then won the ball in midfield and sends a great pass to William Lynch and he makes no mistake to double Kildrum’s advantage.

After this it was end to end stuff but with no real chances. William Lynch was then sent off after receiving a 2nd yellow card.

Kilmacrennan piled the pressure on Kildrum looking to get back into the game but Kildrum held firm and in 88th minute Conor Crossan got the ball to his feet and he hit it low and hard to giving the Keeper no chance.

Cranford went through after a hard-fought encounter in Orchard Park. The first twenty minutes was tight without either team creating a clear-cut chance. Cranford took the lead from the penalty spot when Kevin Doherty was fouled by Harps’ keeper Oisin Crawford.

Chris Carr fired home from the spot. Cranford then suffered a blow when a player was shown a red card but they still pressed. Jack Canning had Lagan’s best effort, shooting just wide.

Cranford started the second half well. Kevin Doherty broke through but shot narrowly wide. Cranford were awarded a second penalty on sixty-five minutes.  David O’ Donnell converted this one.

Cranford still held an edge but Lagan kept going and grabbed a goal on 85 minutes.

Seamie Cullen sent over a great cross and when it broke loose Jack Canning fired home. Lagan pushed but Cranford held firm and always threatened on the counter.

For Lagan Barney Meehan and Ruairi Crawford were best. Kevin Doherty and Chris Carr did well for Cranford.