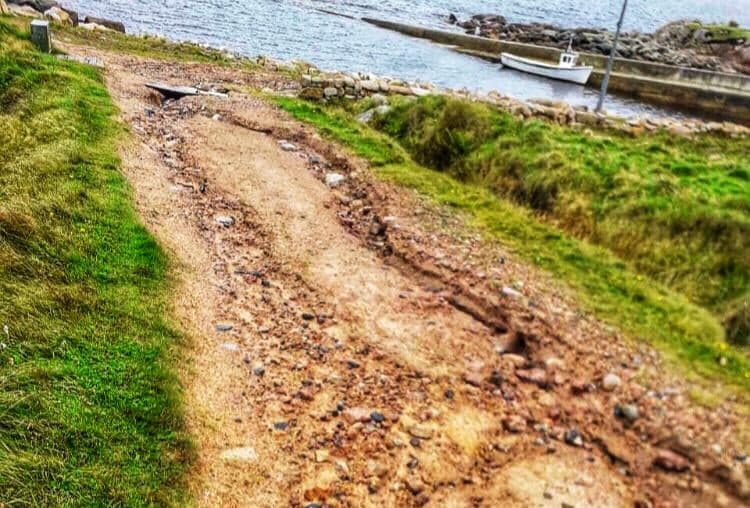 “They are dangerous”: Health and safety fears continue over Donegal islands

More concern has been expressed over health and safety fears on two Donegal Islands following calls for them to close last week.

Gola and Owey Island have been the subject to scrutiny over the last several weeks, with roads and walkways said to be a ‘serious risk’ to tourists.

It comes as the government have been slammed for failing to provide sufficient funding for the Gaeltacht areas.

Chairperson of Donegal County Council Islands Committee, Mairin Ni Fhearraigh, who spoke at a committee meeting last week, said while she disagreed with calls for the islands to shut, she did back fears over the health and safety on the islands.

Speaking to Donegal Daily, Ni Fhearraigh explained how earlier this month a pre-planned tour of Gola Island had to be cut short on health and safety grounds amid fears serious harm could be caused to visitors.

On Friday, €110,000 was sanctioned to carry out the works on the islands road infrastructure on Arranmore and Gola  – while funding for roads on Owey Island was not granted.

Ni Fhearraigh is now calling for government funding for roads on the all of the islands’ to be sanctioned at the start of next year in order for work to planned and carried out on in Spring 2020.

“There are two issues with the current situation. The first one is that the roads are really in a bad state on most of the islands and the second thing is that it is too late in the year,” Ni Fhearraigh said.

“Now that funding is in place, the government will probably be saying that it had to be spent by the end of the year, which would probably mean that it would be spent unwisely.

“With bad weather and shorter days on the way, it wouldn’t make sense to start work on the island at this stage of the year.

“Ideally, we would like the funding for the islands at the start of the year so that work could be done in March, April and May.”

Local county councillor Micheal Mac Giolla Easbuig insisted last week that if money for all of the islands was not allocated then ‘some of the smaller islands need to be closed in the interest of health and safety’.

However, Ni Fhearraigh, who is originally from Gola Island, didn’t agree with those sentiments.

“I wouldn’t agree with that,” Ni Fhearraigh added. “I think Cllr Michael Cholm was referring to the roads on the islands’ because he is not exaggerating when says they are in a very bad state.

“And there would be a certain element of health and safety involved, but I wouldn’t go as far as saying that the islands’ should be shut because I don’t know how that could be possible.

“But if things keep going the way they are at the moment it is only going to get worse.

“At the moment, some of the roads on both Gola and Owey Islands, you couldn’t really walk on them, they are that dangerous.

“And, it is a shame because this year has been such a good year for the islands, there has been so much going on with different things happening.

“But two weeks ago on a Donegal event, I was tasked with taking visitors on a guided walk around Gola Island, which had been pre-arranged this long time.

“On the day we had to cut the walk short because of the fact the road was in such a bad state that you couldn’t really let people walk on it.

“So, you are trying to put the marketing in place (to promote the island) and at the end of the day you are left with a walk and when you are having to cancel that walk, it is really not good enough.

“It wouldn’t take a lot of money to repair those roads on Gola and Owey and we have been talking and waiting for funding for the roads for a long time.

“We have invited Minister Sean Kyne to meet the Islands Committee and we would like to talk to him and explain to him what is going on, on the Donegal islands.”

“They are dangerous”: Health and safety fears continue over Donegal islands was last modified: October 22nd, 2019 by Shaun Keenan