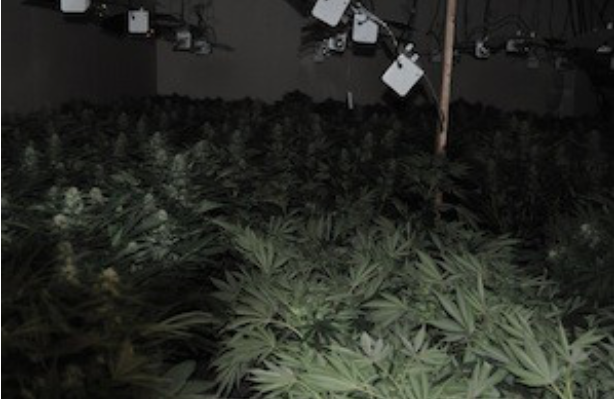 A 59-year-old Derryman has been given a one-year suspended sentence for aiding and abetting the cultivation of cannabis at a grow house in east Donegal.

Over 100 marijuana plants were found when Gardaí raided a property at The Haw, Carrigans on October 23, 2015.

Officers found two grow tents, each containing ten mature plants, while numerous other plants or cuttings were found along with incubators under fluorescent lighting.

Detective Sergeant Kealy and colleagues went to the premises on October 23, 2015 and found a male inside. The male was subsequently arrested and charged with possession of a controlled drug and cultivation of cannabis without a licence.

Other detectives remained at the house to preserve the scene when they heard a key turn and a male entered the property, where he shouted to ask who had turned off the radio.

Officers altered the man to their presence and he dropped the key on the floor.

Edward McDermott (59) of 11 Abbotswalk, Bogside, Derry was arrested and charged with aiding and abetting the cultivation

McDermott told Gardaí that the owner of the property was living in Dubai and he had been asked to check on the house.

Barrister for McDermott, Mr Moriarty, said his client, who has no previous convictions, had suffered ‘a veritable constellation of medical difficulties’.

“A black dog has had a firm hold for the majority of his life,” Mr Moriarty said.

“He showed signs of mental fragility from an early age and he has been in poor health for a long time.

“This was not an operation for profit and not one described as being on an industrial scale.”

McDermott’s co-accused, Christopher McDaid, received a one-year suspended sentence at Letterkenny Circuit Court in February 2017, having said that he was growing the plants to treat his then ten-year-old son who suffered from ataxia-telangiectasia, a rare genetic disorder which has no cure.

“I have to deal with it as being one where it has already been established that this was a not-for-profit operation,” Judge Aylmer said.

“His co-accused was doing this for a particular medicinal purpose. Mr McDermott is before me having pleaded guilty to aiding and abetting the operation He is a person who is obviously vulnerable and prone to being in an operation such as this and being taken advantage of to some extent.”

Judge Aylmer said the offence could merit a sentence of 18 months for McDermott. However, Judge Aylmer reduced that to one year and suspended the sentence. He directed that McDermott enter into a bond of €100 to keep the peace and be of good behaviour.