Exclusive: Pair break into hospital and film themselves playing Ouija board

A full investigation has been launched after two people broke into the roof-space of Letterkenny University Hospital and filmed themselves drinking and playing a Ouija board.

Gardai attended the scene after the man and the woman gained access to the ‘off-limits’ area.

The pair even made a video of their break-in and posted it to Facebook.

It is not known if any serious damage was caused during the security breach.

In the video, the woman can be seen with a bloody face after she cut herself while gaining access to the area.

The roofspace of the hospital contains sensitive machinery used for the general operation of the building.

“We’re stuck in Floor F, on the roof of the general hospital and we’re stuck. We’ve had a couple of drinks. We’re trapped. We’re actually trapped and I don’t even know where the lights are. 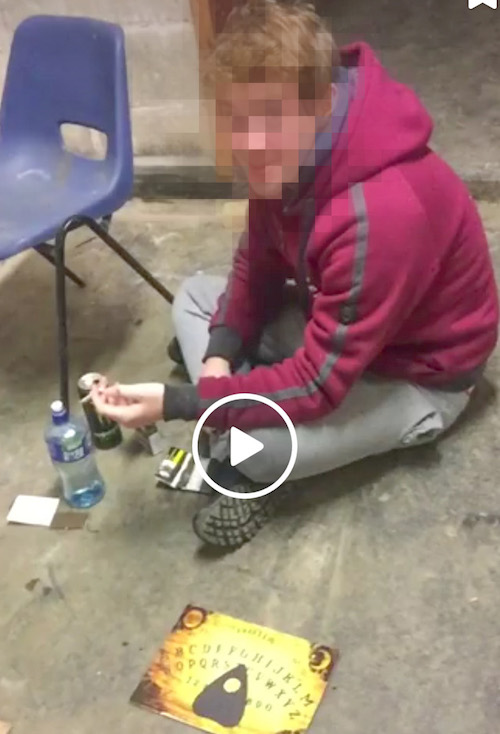 One of two people who broke into the roof space of Letterkenny University Hospital.

“The things we get up to. So there you go. There’s a wee blog for you from the hospital roof. Not where I wanted to end up but I was a dick,” she says.

In one scene on the video the woman, who is from Co Donegal, is seen pointing to the Ouija board which the man is seen operating.

The woman adds “We’re attempting to play the Ouija board but I don’t think it will work.

The man can also be seen lighting cigarettes beside what are understood to be electronic control isolaters.

A spokesperson for the Saolta University Health care group, which runs the hospital, confirmed to Donegal Daily the matter is being fully investigated.

She said “There was an incident on Monday night (11 November) where two unauthorised members of the public gained access to a part of the hospital where work was being undertaken by contractors. An Garda Síochána attended.”

Exclusive: Pair break into hospital and film themselves playing Ouija board was last modified: November 17th, 2019 by Stephen Maguire
FacebookTweetLinkedInPrint
Tags:
break-inGardaihospitalinvestigationletterkennyOuija Board