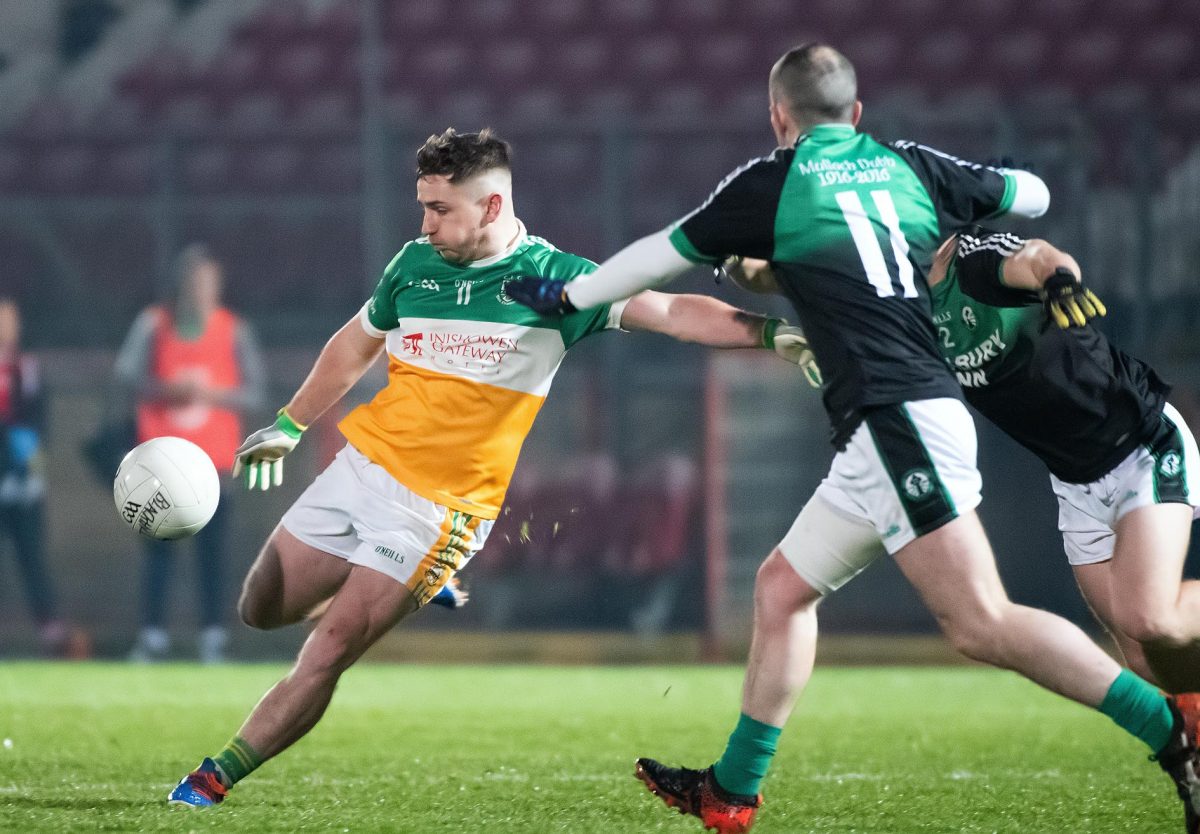 BUNCRANA’S quest to make it a three-in-a-row for Donegal with success in the Ulster Junior Football Championship fell short when a substandard second half saw Blackhill Emeralds take the crown to Monaghan, writes Alan Foley

The Buncrana side managed by Malachy McCann had hoped to follow in the footsteps of Red Hugh’s last year and Naomh Colmcille in 2017 to win provincial successes – Donegal hadn’t so much as a single one till that point.

This evening in the chill and lingering fog at Healy Park in Omagh, Buncrana were four points in front midway through the first half and three up at the break, only to miss out having scored just a point after half-time.

Tommy Geehan scored a goal with the last kick of the game to put Buncrana out of their misery. Blackhill thought their way back into things after a difficult start and were deserving of their triumph.

Ryan Bradley made a telling introduction in the penalty shoot-out semi-final win over Tyrone’s Rock St Patrick’s and the 2012 All-Ireland winning wing-forward was in from the off to provide presence in the full-forward line alongside Campbell, with Darach O’Connor more than willing to pick up the pieces.

After 10 minutes, Buncrana’s support would’ve been more than satisfied with the start they had, with a 0-4 to 0-1 lead manufactured. Bradley and Campbell joined Caolan McGonagle and Jack O’Loughlin on the scoreboard, after the opening score had come from Paul Finnegan.

With goalkeeper Harry Doherty suspended following his cameo in a late semi-final melee at Celtic Park, Sean Parker took up position between the sticks.

He was given something of a tester on 13 minutes with a dropping ball in and opted to punch. His purchase wasn’t bad, although it fell to Finnegan, whose shot went past Parker but not Matthew Mulholland was saved on the line.

Another score came from Buncrana, this time it was Aeden Campbell from his spot at No3, and it was 0-5 to 0-1. Blackhill, though, tweaked and put Shane Courtney in front of O’Connor and they began to claw their way back into things.

Aidan McCabe saw his team get back to 0-6 to 0-5 as the first half drew to a conclusion, with four points from play on the bounce from Tommy Geehan, Hugh Byrne, Andrew Burns and Finnegan.

Buncrana’s only score in the sequence between the 15thand 28thminute was a Campbell free. However, the Buncrana full-forward added another before and break and O’Connor’s stylish effort made for a three-point half-time lead for Buncrana at half-time – 0-8 to 0-5. 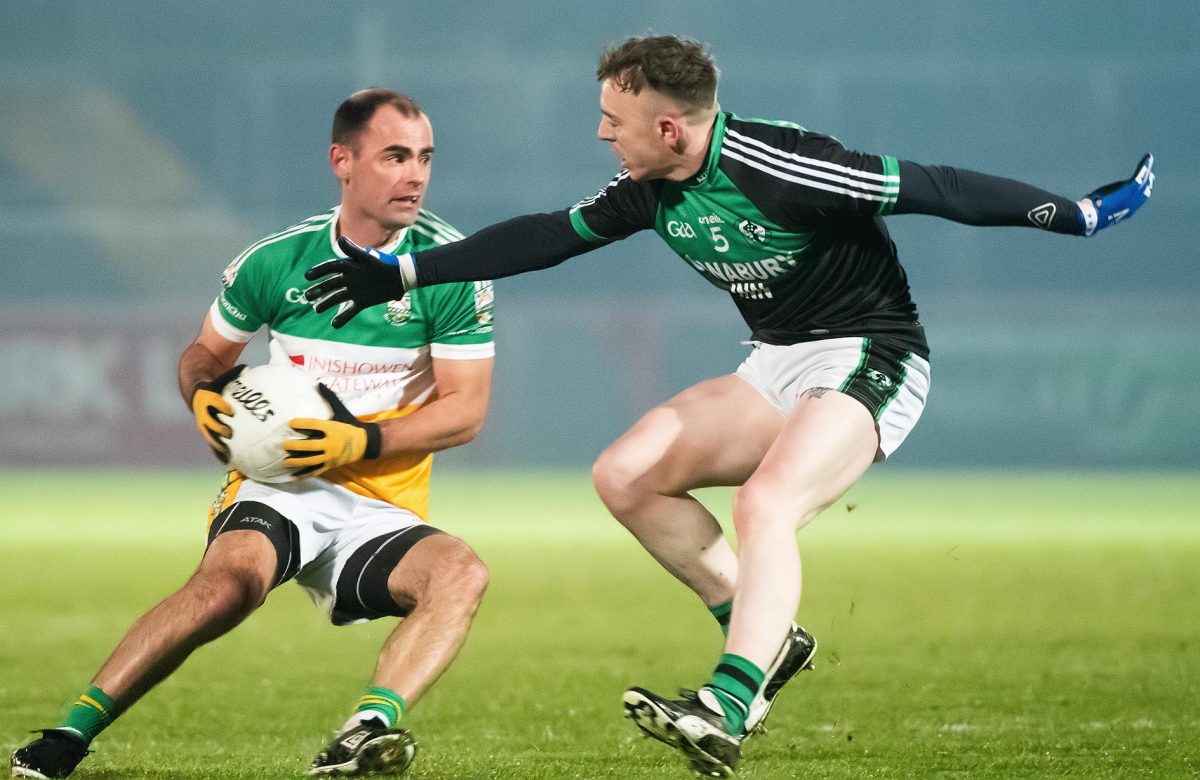 Buncrana had defeated Letterkenny Gaels to win Donegal and then got the better of Collegeland 1-13 to 0-9 at the Athletic Grounds in Armagh in the Ulster quarter-final, prior to the 1-14 to 2-11 extra-time draw against Rock in the semi-final, which they won on penalties 4-3.

Tommy Geehan scored the first point of the second half and two frees from Dermot Daly brought the sides level by the 38thminute and then Michael Geehan continued the impressive run to edge Blackhill in front, 0-9 to 0-8.

Buncrana’s change was becoming unhinged and they needed to get their challenge moving again. Campbell was out of luck when he hit the upright about a foot over the crossbar when shooting for goal. O’Loughlin had provided the chance although the Buncrana players did feel that Anthony Courtney had pulled Campbell as he tried to get his shot off.

The opportunity, though, did provide evidence of what might happen if Buncrana went long, a practice that had served them well early in the first half.

Blackhill were content to run and run they did, with purpose. And with a lead their defence were tigerish. Buncrana had scored just once from play between the 14thand the 52ndminute.

Michael Geehan of Blackhill doubled the lead before O’Connor broke the Buncrana duck, so with just eight minutes to play it was 0-10 to 0-9 for Blackhill.

Caolan McGonagle, with a mazy run from back to front, set up O’Connor who skipped inside only to see his shot low at goal turned around the post by a superb save from goalkeeper Michael Shevlin. Only five minutes were left to play.

By the time that had elapsed, the fourth official Sean Hurson signaled eight minutes in injury time. Seconds later, Buncrana’s deficit was doubled as substitute Burns had posted his second point.

Buncrana laid siege in the depths of injury time but couldn’t find a way through. O’Connor was sent off late on for a foul and a second yellow on Tommy Geehan.

Blackhill had defended well and when they won possession, didn’t lump it clear and maintined possession well. From one such break in the 10thminute of injury time they scored the only goal of the game as Stephen Courtney laid it on for Tommy Geehan to slot past Parker.