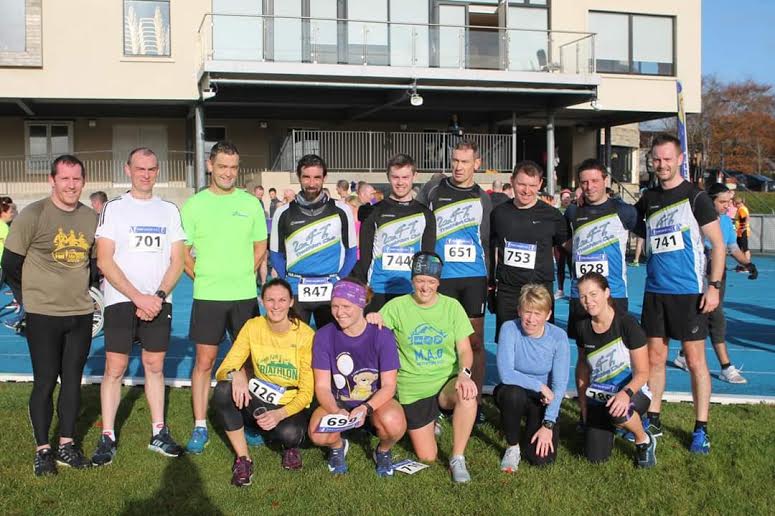 IT’S hard to argue that triathletes are in the off season – over 20 hardy members of Letterkenny 24/7 toed the line on a crisp Stranorlar Sunday morning to take on the challenge of the annual Remembrance 10k Road Race at the Finn Valley Centre.

Over 700 participants took to the start line to both run and race but also remember and reflect.

For 24/7 the race was the culmination of a number of month’s hard winter training under the guidance of club athletics coach Ciaran ‘Duck’ O’Donnell.

Monday sessions since the race season finished have been geared toward this event so hopes were high even if expectation is a little trickier to gauge!

Paul Cullen tore over Navenny Street like a man showing all the signs of the mission he was on – an absolutely blistering 35.23 seeing Cullen smash his PB & taking take 5th prize overall.

Next, in hot pursuit with an assured 35.45, was club stalwart Gavin Crawford showing the early duathlon season work is already paying dividend.

Despite racing into the season Brian Gormley (42.53) showed no sign of holding back –– as he led a posse of 24/7’s all in quick succession.

Matthew McKinley (43.12 PB) is fast losing the tag of cyclist as he continues to knock lumps off his best times in the trainers.  Joe Doherty, a first year member who would be forgiven for only yet finding his feet instead took the race by the scruff of the neck, demolishing his previous best as 43.48 winked up from the Garmin!

Ciaran Doherty booted his way around to a mighty 44.24, with this year’s try-a-tri revelation, Mickey Crossan snapping at his heels with a booming 44.29.

Margaret Kelly, the deserved 2019 Female Triathlete of the Year showed again why she’s held in such high esteem with a superb 44.37. 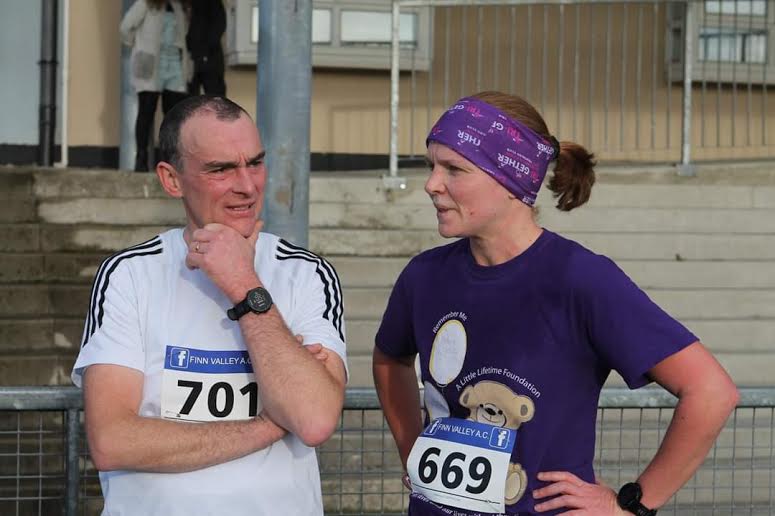 Two more men who deservedly enjoyed their Sunday lunch were Lee Haughey and Conor McGlinchey (45.24 & 45.33).  Brilliant races from a pair of fellas only beginning to show what they’re capable of.  More PB’s in the bag – 2020 an exciting prospect for both.  The same for Aidan McFadden – even at the tail-end of a long year’s training Aidan McFadden managed to find a brilliant 46.09.

In 2019 Paddy Doherty has been ever present whether on the training or racing scene!  With a powerful 47.09.  He’ll be keeping the cards close to his chest now until he welcomes the blow-ins up the Long Mile at the Kilmacrennan 10km!!!!

Emmet McClafferty was like a dog after a bone all day.  From the start line up to careering around the final bend on the track with the same grit as he started.  47.25 a brilliant PB.

And another PB – this time the unflappable Rachel Stilvern (48.15).  2019: Marathon?  Check.  Half-Ironman?  Check.  Taking an early break for Christmas?  Nope!  Gave it absolutely everything.  Got it across the line!

That Eamon Patton had any soles left on his running shoes after the year he’s had is truly amazing (from try a tri to FULL Ironman), the 24/7 2019 Best Male Newcomer of the Year bounded across in a commanding 48.15.

Danny McDaid’s hard work was rightly rewarded.  At 49.35 not alone was he seconds inside his original target, he was minutes inside.  Amazing progress.

Another with a long and highly achieved year under her belt – Anne Robinson knocked minutes off her last run on this course.

The 2019 Senior Female Athlete of the Year powered her way from Railway Road to right down Millbrae with an impressive 49.37.

Noelle Parker took to the start line having only more recently gotten back to competitive sport.  Some would allow a little time to get back into the swing of it – but not Noelle!  Absolutely trouncing her pre-race target, a top-class 50.12.

Labhoise Maguire blew the barndoor right off the hinges crossing the line with a massive PB (51.00), another with a Dublin Marathon miles in her legs but showing no signs of slowing.

Club Treasurer Amanda McNulty is another who transferred good work in training into racing with a determined and well-earned 51.08.  Just behind, Patrick Patton 55.18 ran a strong race, another who’ll have his Christmas dinner able to reflect on a great year’s racing.

Eunan Russell’s triathlon career began with the try a tri in April and what progress he’s made!  With 56.09 showing on the clock he’ll know there’s even more to come!

Fiona Temple’s race showed absolutely no signs of the heavy legs that someone with all the recent running would be entitled to mention.  Another with an assured performance, clocking 57.28.

Mary Harkin has scaled all kinds of sporting heights this year – appropriately the 2019 Most Improved Female athlete – 57.38 further evidence of her ability to deliver.

The highways & byways of Finn Valley will be familiar to Carol McCabe after her recent half marathon there.  At 59.05 she’ll be happy to keep racing there too!

All the ‘dual-citizens’ had superb races also:  Ben Carr (Finn Valley) ran a subline 37.29.  Another welcome sight, Terence Quinn and Raj Mehan (as part of an aptly well supported Raphoe Road Runners  contingent) ran well together.  A familiar sight in triathlon over the years, it’s good to see the boys giving the fans what they want!

The club will shortly be issuing a survey to all club members to gather feedback on club training sessions and how we can seek to improve.

Monday: Run sessions the Track at Aura Leisure Centre.  Warm up leaves Aura Foyer at 6.30 to be on the track for 6.45pm.

Additional Lane for 14-16-year-old will be in place at 7pm sessions from Wednesday 19th September.

Saturday: Club cycle from Aura at 8am- All members must have front and rear lights to take part.

2020 Club membership is now live on the Triathlon Ireland website for anyone wishing to join. https://www.triathlonireland.com/

All members are encouraged to contact club PRO Karol Harvey if they are competing in events and want to be included in club notes. It is great to see so many members take part in events each week  so please submit your results. Results can be sent to 087 374228.