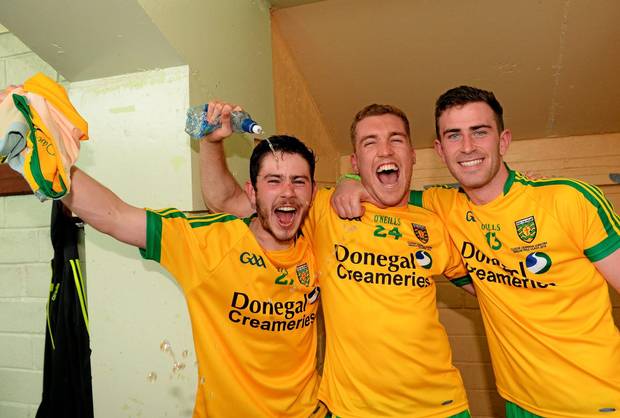 FORMER Donegal footballer Luke Keaney has opened up about his enforced early retirement, while still in his mid-20s, and how the whole scenario has left a sour taste.

The Donegal town man, still only 27, has not played since 2016, when he last represented his club, Four Masters. Persistent hip problems ultimately resulted in Keaney having to call time on his career.

“There is no long-term view in the GAA,” Keaney told Ger Gilroy in a lengthy interview, which aired on Off The Ball today.

“The wider picture, well, there is none – it goes to the back of people’s minds.”

He had been a substitute in the Donegal squad for the 2014 All-Ireland final and had represented Donegal at all levels since he was 15. However, when he was attempting a return in 2016, he had an MRI scan to determine the extent of his ailments.

Little did he know, they were career ending.

He said: “I was only 24, and I’m still trying to get my head around it. My whole dream was shattered, my inter-county career was gone.

“I didn’t even have a girlfriend, didn’t know where my life would go and he was telling me to think long-term, about my quality of life at 70 and not ending up in a wheelchair.

“You’re sitting there and he’s showing you x-rays of your hip and you can see lumps and where the bone has become deformed, but I was still thinking I’d be fine.”

Keaney told of how it all impacted on he and his family and he still struggles with it all.

He said: “I was Luke Keaney, the Donegal footballer, and that was gone. There was a lot of dark days.”

Keaney had to call upon the GPA for financial assistance after the Donegal County Board didn’t step up.

He said:  “At the end of the day, if we’re representing our club or county, the minimum you should expect is to be looked after, and in my case, that didn’t happen until the GPA stepped in.

“When you’re not useful, you’re thrown away. The loneliest spot is on the sideline and if you’re not training in the GAA, you’re a nobody.

“I had to get the money myself, and I got it, and I had no support from them. The GPA stepped in and presented my case to get awarded the funds to cover the injuries.”

Watch the full interview with Luke Keaney below …