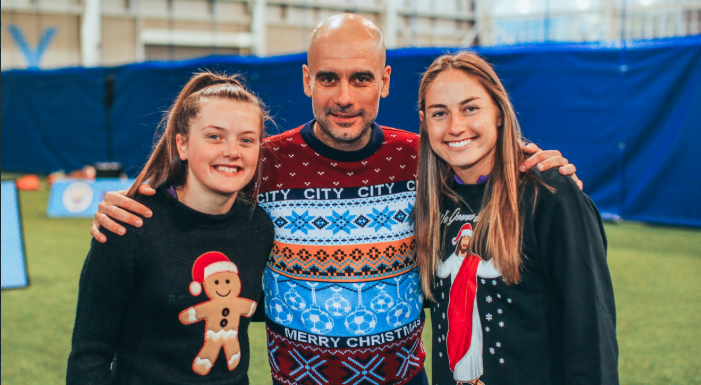 Toland was among 300 staff from the club who wrapped presents, food and clothing yesterday for distribution among nine charities in Manchester.

The event, an annual occasion held by City In The Community, is a popular fixture in the calendar.

Toland, Guardiola and her team-mate Janine Beckie (pictured above) and their colleagues got into the mood on Christmas Jumper Day.

Republic of Ireland international Toland made her City debut against Leicester City in the Continental League Cup and last month made her League debut in the 5-0 win over West Ham.

Tomorrow, City – who are third in the Women’s Super League, three points off leaders Arsenal – welcome Brighton and Hove Albion to the Academy Stadium at 12.30pm.

Tyler Toland with a festive ‘Pep’ in her step at Man City charity event was last modified: December 14th, 2019 by Chris McNulty