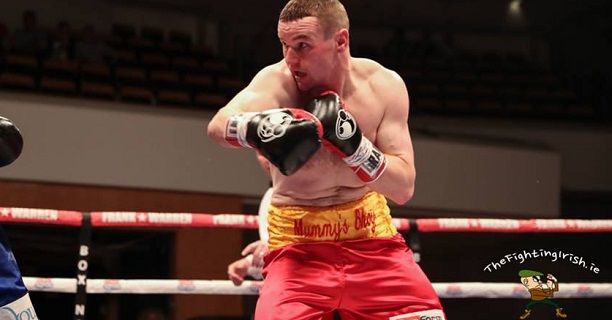 POPULAR Derry middleweight Sean McGlinchey has announced that he is retiring from boxing.

The 27-year-old Creggan man – who had a lot of supporters from the east Donegal and Inishowen areas – hangs up the gloves with a 2-2 record from what was an ultimately frustrating switch to the professional ranks.

The 2014 Commonwealth Games bronze medallist had been expected to face a rematch wit Julio Cesar in Belfast next February.

However, last night McGlinchey revealed that he had made the decision to bow out, citing a lack of fire.

“I feel my time in the game has come to an end,” he said.

“I don’t have the love or fire in my belly that I should have and feel I would be putting myself at risk.

“I love what I am doing now, passing my knowledge onto other people and I feel that I can give a lot.”

McGlinchey rose through the ranks of the Oakleaf ABC and his surge arrived in tandem with the explosion of the likes of Tyrone McCullagh, Connor Coyle and Brett McGinty, who was a colleague at Oakleaf.

In Glasgow five years ago, McGlinchey won a Commonwealth bronze and his switch to the pro ranks brought a surge of excitement.

Points wins over Josef Obesio and Dan Blackwell inside a matter of weeks in 2017 signalled intent, but McGlinchey was subsequently beset by injuries and agonising medical issues.

He returned in October 2018 with a defeat to Padraig McCrory and it would be a further year before ‘Mummy’s Bhoy’ returned – losing to Cesar at the Devenish Complex, Belfast in October.

McGlinchy had signed with Boxing Ireland before the Cesar fight, but he has confirmed that he has fought for the last time.

He added: “Boxing since I was 8 years of age. I had a good run at the game. I’d like to thank everyone that supported me and gave me the massive support.

“Derry boxing is on the high and I look forward to watching the talent in this city come through.”

McGlinchey’s former Oakleaf team-mate McGinty, who is training under Ricky Hatton in Manchester, is expected to make his pro debut in early 2020.