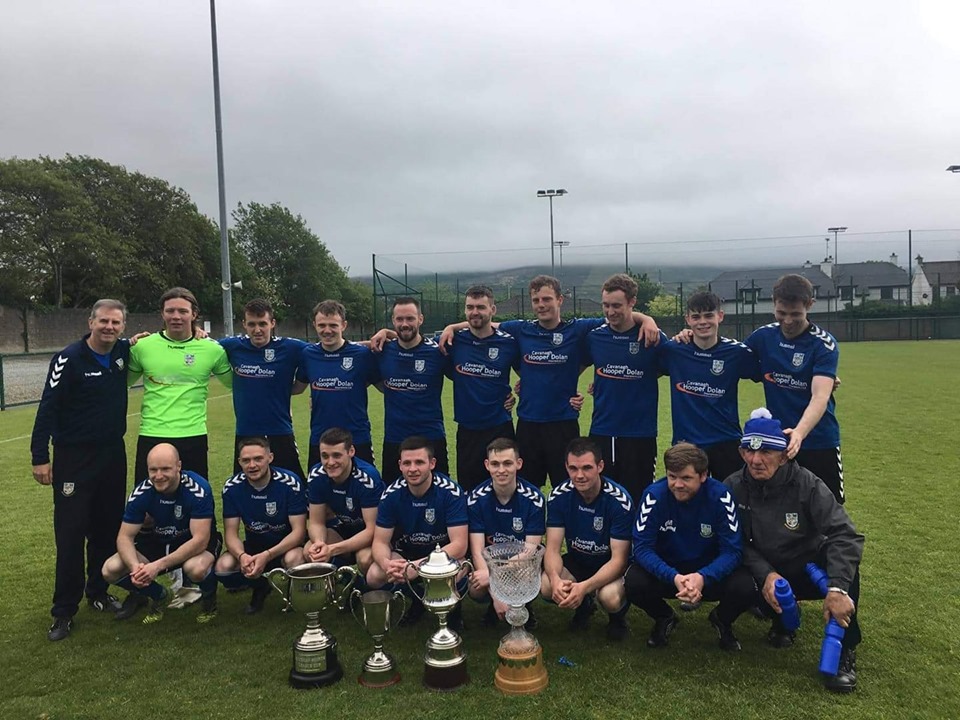 THERE WAS a curtailed programme of games in the Inishowen League today, including away Premier Division wins for Buncrana Hearts and Greencastle FC.

The first attempt on goal came when the home side’s Liam Doherty’s deep cross was headed wide of target by Paddy Doherty.

However, it was Buncrana who opened the scoring mid way through the half when Kevin O’Loughlin’s cross field delivery was headed home by Mikey Friel at the front post.

That lead was doubled minutes later. An unfortunate slip by a home defender allowed Gerard Boyle to run through, round Noone and dispatch to an empty net.

Approaching half time Illies tried to get a foothold back in the game with Paul Doherty being out of luck on two occasions – firstly when he had a snap shot just over and then he drove a second effort wide.

With the benefit of the wind the home side had the upper hand throughout the second half.

Their best opportunity to half the deficit came mid way through but when Paddy Doherty laid the ball back into his path Kevin McGonagle pulled his shot wide of O’ Doherty’s goal.

They had to wait to the death to score – Paul Doherty’s long range free travelling all the way to the net.

And they could have equalised deep into injury time but Doherty’s shot went just over.

Greencastle FC went back to Chapel Lane earlier today with three points thanks to a narrow 1-0 win over a very spirited Cockhill Celtic Youth side who will feel unlucky not to get something from the game.

Cockhill, playing ‘home’ at Stranaclea, Illies, had the first chance on four minutes but Adam McLaughlin shot over the corner of the net, from 18 yards, after good work by Oisin O’Flaherty.

Greencastle’s J Dickson then saw his effort saved by Liam McGonagle on 14 minutes, from inside the 6 yard box, after Cockhill failed to clear a corner.

Stephen Grant shot from wide on the right after good work by Nigel McMonagle.

Greencastle took the lead on 36 minutes when a corner was only half cleared to James Henry.

He floated a great cross into the box for Dickson to flick a header into the top right hand corner of the net, from 7 yards, with McGonagle having no chance in the home net.

Cockhill responded well and on 39 minutes Adam McLaughlin hit the post direct from a corner on the left with Doherty scrambling on the visitors net, the ball eventually cleared by Gavin Harkin.

Cockhill came out with a determined attitude in the second period and had Greencastle pinned in for long periods with the visitors happy to sit and use the pace of McMonagle to get them higher up the pitch.

For all the possession the home side had they didn’t trouble Doherty too much and will be disappointed not to make more on the half chances they created.

The best chance fell to Michael Noone on 72 minutes when he headed wide from the penalty spot after a great delivery from a dead ball from Adam McLaughlin.

In the final 20 minutes Greencastle almost got in on the break with the pace of McMonagle but some good defending and excellent keeping allowed Cockhill to still be in with a shout in the final ten minutes.

Clonmany Reserves took an early lead in the 5th minute after they won a corner from their first attack.

Michael Devlin took it and rolled it to Adam McLaughlin at the corner of the 18 yard line. Adam ghosted into the box un-challenged and chipped the ball to the back post, where it found the net, deceiving Carrowmena keeper Mark Doherty who was stranded at the near post.

Clonmany made it 2-0 in the 7th minute when Paul Devlin sent through a pass for left winger Dean Harkin to burst on to and he rounded Mark Doherty and rolled the ball into the unguarded net. Clonmany added a third in the 20th minute.

Paul Devlin started the move at half way and although he was fouled as he released the ball the referee played advantage and the ball came to Michael Devlin on the right of the box and he shot to the bottom corner giving Mark Doherty no chance.

Michael Devlin doubled his tally in the 41st minute when Jonathan McDaid rolled the ball in to him in space 12 yards out from goal and he controlled the ball and swivelled in one movement to volley high to the roof of the net despite Mark Doherty’s best efforts at his near post.

Clonmany wrapped up the scoring in the 51st minute when Michael Devlin nipped in to rob a Carrowmena defender as they played out from the back and he rounded Mark Doherty and rolled the ball to the net to complete his hat-trick and make the score 5-0.

Carrowmena forced a good save from Clonmany’s Tiernan Doherty in the 59th minute when Robert Kane found space on the left side of the Clonmany box and got a good shot away but Tiernan dived to his left to parry the shot away and it was hacked to safely.

The last action of note resulted in Carrowmena’s Robert Kane getting a red card for dissent and the match was blown up shortly afterwards.

THE visitors continued their excellent league form at St. Egeney’s Park and deservedly came away with all three points.

They dominated the first half and had established an unassailable lead by the interval. Mark McLaughlin put his side ahead in the opening minutes when he gained control of an over the top ball and side footed home from close range.

Soon after it was 2–0 when Karol Harkin found space in the box to shoot to the net.

McLaughlin then notched his second when his 20 yard free found the bottom corner of Philip Doherty’s net and he had achieved his hat trick within the opening half hour when he picked up the ball, advanced and rounded Doherty before driving to the net.

Dessie Doherty then got in on the act, finding space to turn home when well placed.

On the stroke of half time Harkin headed home at the back post to record his side’s sixth goal.

Clonmany didn’t show as much urgency after the break and the home side came more into the game.

They got on the scoresheet when Thomas Doherty broke through and curled a 20 yard effort beyond Kieran Friel.

Both Ryan Toland and Ryan O’Donnell created openings and managed to test Friel but they could not find any further goals.